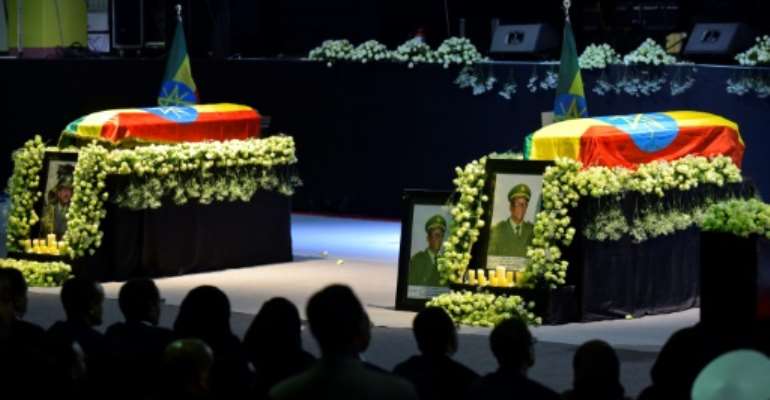 Ethiopia has been on high alert since the attacks, which killed the national army chief, a retired general and three senior regional officials. By Michael TEWELDE (AFP)

Ethiopia's security forces have arrested more than 250 people in a sweeping crackdown following a failed suspected coup attempt and the assassination of five high-ranking officials, a government taskforce said Thursday.

The country has been on high alert since the attacks at the weekend in the capital Addis Ababa and northern Amhara state left the national army chief, a retired general and three senior regional officials dead.

The violence has underscored the pressure on Prime Minister Abiy Ahmed who has pursued democratic and economic reforms that critics say have left the country divided and wracked by ethnic fighting.

A taskforce commissioned to probe what the government has called an attempted coup by a renegade security chief said the attackers conspired to kill a "wide array of government officials".

The Security and Justice Taskforce "has arrested 212 suspects in Amhara region and 43 suspects in Addis Ababa," it said in a statement issued late Thursday.

"Destructive forces have ignored the government's mercy and kindness to commit an act of treason," it added.

Two heavy machine guns and 27 automatic rifles were also seized during the arrest.

An ethno-nationalist party in Amhara had said earlier Thursday that more than 56 of its members and supporters had been arrested in Addis Ababa alone.

It is unclear if these were among the 255 arrests mentioned by the taskforce.

The government has accused Amhara security chief Asaminew Tsige of orchestrating the two attacks at the weekend.

On Saturday in Bahir Dar, the state capital, gunmen entered a meeting of top Amhara officials and opened fire, killing the regional president, his top adviser and the attorney general.

A few hours later in Addis Ababa, some 500 kilometres (310 miles) away, army chief Seare Mekonnen was shot dead by his bodyguard.

A retired general visiting him was also killed.

Asaminew, who was shot dead on Monday while on the run, was accused of coordinating the two attacks and what authorities described as an attempted coup.

The taskforce, however, said it was still investigating whether in fact the two attacks were related.

Asaminew, who has been described by analysts as a hardline Amhara nationalist, had been accused of trying to raise a militia.

He was only released from prison last year after serving nearly a decade behind bars for a separate failed plot to seize power.

The violence is seen as a backlash to Abiy's efforts to lead democratic reforms in Africa's second-most populous nation, which is scheduled to hold elections in 2020.

Observers say the prime minister's breakneck reforms have severely weakened the unity of the once all-powerful ruling party.