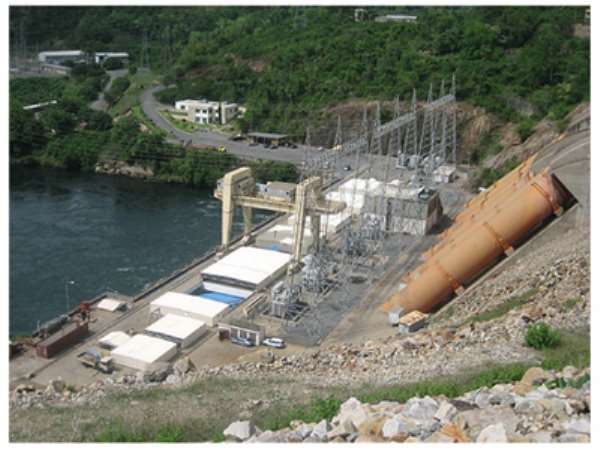 Member of Parliament (MP) for South Dayi, Mr Rockson-Nelson Dafeamekpor, has made a passionate appeal to the Government to use a matter of necessity fulfill its compensation package to communities resettled as a result of the construction of the Akosombo Dam, in 1965.

In addition to the compensation, the South Dayi lawmaker is also asking the Volta River Authority (VRA) Resettlement Trust Fund to take steps to complete all the construction of housing units which were earmarked as part of the resettlement.

Rockson Dafeamekpor made these appeals in a statement on the floor of Parliament Thursday, June 27, dubbed " Statement on the Role of the Volta River Authority Resettlement Trust Fund Vis-A-Vis, the Situation of the Resettled Communities."

Making the demands through Parliament, the MP said, "The Trust Fund must take clear steps to redeem its image and pay as a matter of urgency all compensation due to victims of the dam construction.”

The Trust, he noted must also go back to Tongor-Tsanakpe communities in the South Dayi to complete the construction of the 135 quarters earmarked for the resettlement of the people as part of the package.

Mr Dafeamekpor said an estimated population of 80,000 people across approximately 730 villages which include Tongor Ahor, Tongor Tsanakpe, Kpeve, Todome and Kaira in the South Dayi District of the Volta Region were displaced.

The displaced persons resettled in about 52 communities spread over the Volta, Oti, Eastern, Brong Ahafo Regions, and Northern regions, but landowners of those communities have started selling lands they farm on to Estate Developers, depriving them of livelihood.

Mr Dafeamekpor noted that for well over 40 years, the resettlement communities have suffered deprivation and life has been very difficult thereafter.

The Volta River Project, that birthed the Akosombo Dam, Ghana’s first source of electricity through the use of hydro, was executed by the Government of Ghana through VRA, which was established in 1961 by an Act of Parliament, the Volta River Act, 1962, Act 46.

Hydroelectricity generated from the Volta Lake through the Akosombo Dam remains a reliable and cheapest source of power supply in Ghana since its completion in 1965.

STATEMENT ON THE ROLE OF THE VOLTA RIVER AUTHORITY RESETTLEMENT TRUST FUND VIS-À-VIS THE SITUATION OF THE RESETTLED COMMUNITIES BY HON. ROCKSON-NELSON E.K. DAFEAMEKPOR, ESQ.

Mr. Speaker, I thank you for the opportunity to make a statement. The Volta River Authority Resettlement Trust Fund Vis-à-vis the deplorable conditions of the Resettled Communities.

Mr. Speaker, the importance of the Volta River Project, which resulted in Ghana’s first source of electricity through the use of hydro, cannot be overemphasized. The project, which was executed by the Government of Ghana (GoG), through the Volta River Authority (VRA), established in 1961 by an Act of Parliament, the Volta River Authority Act, 1962, Act 46, remains a reliable and the cheapest source of power supply to Ghana since its completion in 1965 by Ghana’s first President, the Osagyefo Dr. Kwame Nkrumah, which resulted in the resettlement of lots of communities. However, it was only in 1996 that the VRA Resettlement Trust Fund was established through an act of Parliament.

Mr. Speaker, in our quest to provide for the energy needs with the intended motive of spurring development and attempt to move towards economic independence of our people, the Akosombo dam was created. Many people whose livelihoods depended on fishing in the great Volta River, estimated at some 80,000 across about 730 villages, were displaced including Tongor-Ahor, Tongor-Tsanakpe, Kpeve, Todome, and Kaira in the South-Dayi District of the Volta Region. As a result, the affected people were compelled to be moved from their original ancestral homes and areas of habitation to other places with the hope of new beginnings. These displaced people were relocated and resettled in about 52 townships spread over four regions of Ghana; namely Volta and Oti Regions (with 23 of such communities), Eastern Region (with 16 of such communities), formerly, Brong-Ahafo Region (with 5 of such communicates) and Northern Region (with 8 of such resettlement communities) and covering some 17 districts of Ghana.

Following the rising demands for the provision of social amenities in these resettlement communities, coupled with the difficulties that existed in obtaining funds to meet these demands, the Volta River Authority Resettlement Trust Fund was established in 1996. For well over 40 years of their existence, the resettlement townships have suffered degradation due to deprivation, and life has been very difficult in those resettlement communities. The Resettlement Trust Fund, therefore, requires VRA to provide the Trust Fund with an Annual Grant to be used for developmental projects for the 52 or so Resettlement Townships. To date, Mr. Speaker, this remains the main source of revenue for the Trust Fund. The Trust Deed, however, gives the Managing Trustees the mandate to explore other sources of revenue for the Fund. Over the years, collaborations with development partners, have brought about some livelihood improvement projects to settlers in the various communities established.

Mr. Speaker, the VRA Resettlement Fund was established with one of its priority areas being the provision of basic-needs projects to enhance the living standards of the settlers. These areas include Education, Health, Social amenities, Water and Sanitation based on requests received, the Board of Trustees are required to meet at a determined time, to assess and prioritise the needs of the communities contained in their requests, and to intervene in making the lives of the people in these 52 or more communities better, with the hope that life will be as easy as it could be in any part of the country.

In addition, in the area of Health, Mr. Speaker, there is also record to show that the Fund constructed health centres, nurses quarters, and supplied equipment to some health facilities in some of these communities. In the area of Socio-economic development, the Trust had also supplied tractors and implements as well as corn mills to some of the communities according to the Trust’s records. The trust also records the provision of community centers for some of the communities to serve worthy purposes for our folks in these parts of the country.

Mr. Speaker, a quick scan of the website of the Volta River Authority Resettlement Trust Fund would provide one with the lists of communities established through the Resettlement scheme, and the specific projects executed for the benefits of the people.

Mr. Speaker, in a research paper presented at the 9th annual symposium on poverty research in Sri Lanka exploring experiences of resettlement, in November 2008 by L. Raschid-Sally, E. K. Akoto-Danso, E.A.K. Kalitsi, B.D. Ofori, and R. T Koranteng on the topic: The Resettlement Experience of Ghana Analyzed Via Case Studies of the Akosombo and Kpong Dams, they identified the guiding principle on which the general policy for resettlement of the government of Ghana (GOG) is based as that which requires that nobody should be made worse off by the implementation of government projects. Thus, the main objectives of compensation identified by them are to:

Restore and enhance the livelihood of affected people through land allotment for sustainable agriculture and facilities and opportunities for fishing and other forms of economic activities.

Ensure minimum disruption in their social organization and assist them to develop viable social relations.

The question is: are the affected communities sharing adequately from the benefits of the constructed dams: No.

Citing (Kalitsi, 2008), they write “For the Akosombo and Kpong projects serious efforts were made to achieve the first three objectives namely, restoration of lost assets, enhancements of livelihood as well as the provision of primary services”. They state however, that “The same level of focus was not given to the last two objectives namely, minimum disruption in social organization and adequate sharing in project benefits”. They note again that funding is a major gap for the VRA Resettlement Fund objectives, “financing limitation remains a major constraint in pursuing the Trust’s objectives”.

Mr. Speaker, it goes without doubt that, just as other communities across the country, including the capital city, Accra, these resettlement communities remain faced with challenges that need to be addressed. Challenges having to do with lands, where the original owners assume a greater proportion, leaving the settlers with little arable lands for farming, needs to be addressed. This can be attributed to the non-payment of compensations to the original owners of the lands. In south Dayi, compensation payment due to the people of Toh-Kpalime for giving large tracks of land upon which the Tongor-Kaira Resettlement town was built, has not been paid. In Tongor-Tsanakpe, only 10 of the proposed 145 Quarters have been completed, the rest 135 have been abandoned since 1975. The people are angry against the government when clearly this is not a government matter. Again, Mr. Speaker, the issue of unemployment among the youth, permeates these communities. This challenge can be tackled with the provision of working capital to enable those who wish to venture into entrepreneurship to do so with the hope that their activities would provide means of employment for others. In addition, direct government intervention in securing investments that would establish industries in some of these communicates, would go a long way to address the unemployment situations identified among the teeming youth in these areas.

Road networks, water provision, sanitation needs as well as economic needs of the various resettlements communities, continue to rise as the population in these areas increase. Having knowledge of the complexities that resulted in the establishment of these towns, it needs no further emphasis, that, efforts must be improved at ensuring a comfortable life for our compatriots who were displaced in order to make the lives of Ghanaians better as a result of the economic activities the provision of electricity generally presents to us.

Mr. Speaker, all the Tongor and most Kpalime communities are without portable water as well as electricity even though their vast lands were lost in the deluged. These communities are located by the lake shore but they do not have pipe-borne water.

The VRA Resettlement Trust Fund has a specific mandate, which mainly is to ensure the well-being of all persons and communities affected by the Volta River Project and to ensure that efforts are made to improve on the standards of conditions of these communities so as not to make them worse off than their previous conditions prior to the destruction suffered as a result of the GoG project on the Lake. This means that the communities require and demand a lot of effort from the Fund in meeting their needs. Mr. Speaker, I demand nothing less. The Trust Fund must take clear steps to redeem its image in these communities and pay as a matter urgency all compensations due to victims of the dam construction. The Trust must also go back to the Tongor-Tsanakpe to complete the construction of the 135 quarters earmarked for the resettlement of the people.