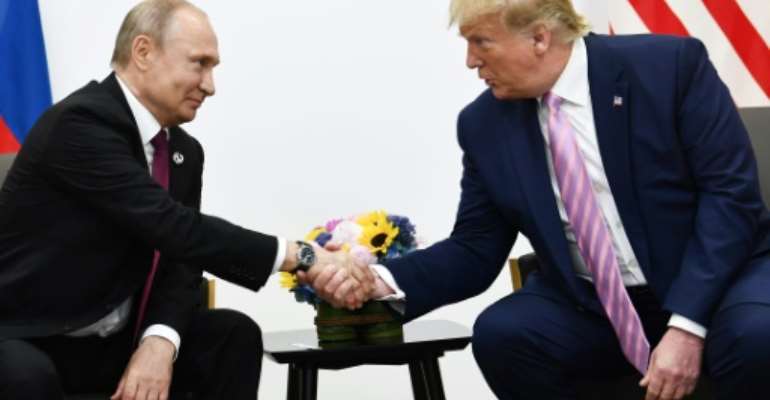 US President Donald Trump Friday struck a conciliatory tone with fellow world leaders at one of the most high-stakes G20 meetings in years, despite deep divisions on trade and climate change.

Host Shinzo Abe, the Japanese prime minister, appealed for unity among bickering world leaders at the start of Japan's new era of "Reiwa" or "beautiful harmony", with the long-running trade row between China and the United States threatening to overshadow the event.

"With your help, I hope we will realise beautiful harmony in Osaka... rather than highlight our confrontations, let us seek out what unites us," said Abe.

The appeal seemed to have chimed with arguably the club's most volatile member, as Trump dialled down his previously feisty rhetoric against traditional US allies.

Map of Osaka locating the venue for the G20 leaders' summit on June 28-29.. By Valentina BRESCHI (AFP)

Fresh from describing Germany as "delinquent" for not paying enough into the NATO budget, he was effusive when meeting Chancellor Angela Merkel.

"She's a fantastic person, a fantastic woman and I'm glad to have her as a friend," he said.

Merkel appeared well during the talks, a day after a second public shaking attack raised fears about her health. German officials insist she is not ill.

Likewise, Trump hailed Abe, for sending "many automobile companies" to the United States, apparently heartened by a document Abe gave him showing investment into the US.

Only two days earlier, he had seemed to question the US-Japan alliance, saying that Washington was committed to protecting Japan but if America was attacked, the Japanese could just "watch it on a Sony television".

Trump entered with President Vladimir Putin, chatting amicably, and the Russian leader patted his American counterpart gently on the back as they parted ways.

The pair met later for the first face-to-face talks since Helsinki in July with Trump hailing a "very, very good relationship".

The amicable meeting came after Putin in an interview with the Financial Times declared that the "liberal idea has become obsolete", a view that met with strong pushback from EU President Donald Tusk.

"What I find really obsolete are authoritarianism, personality cults, the rule of oligarchs," Tusk said at a briefing in Osaka.

Putin later received a broadside from British Prime Minister Theresa May who said normal relations would not be restored until Moscow ends its "irresponsible and destabilising" activity.

It was their first formal face-to-face since the poisoning in the English city of Salisbury of former spy Sergei Skripal last year that plunged ties into the deep freeze.

Despite warm first encounters, the meeting could be one of the most explosive in years, with clashes possible over trade, Iran, and climate change.

"We are seeing rising tension over trade and geopolitics, which are downside risks," admitted a Japanese official on the sidelines.

The most eagerly anticipated event will be on Saturday when Trump and Chinese President Xi Jinping hold their first face-to-face talks since the last G20, to thrash out a truce in a long-running trade war that has stymied the world economy.

Experts believe there is little chance of a full deal immediately, saying the best hope is for a truce that would avoid Washington imposing new tariffs and ramping up the conflict.

But even a truce is not guaranteed, with the Wall Street Journal reporting Thursday that Beijing will not agree to any deal unless Washington lifts its ban on Chinese telecoms firm Huawei.

In an apparent reference to this issue, Trump at the opening session said: "We must also ensure the resilience and security of our 5G networks."

Trade is far from the only contentious issue on the table, with climate change emerging as another sticking point.

Japan is hoping to bridge the gaps between European leaders who want strong action and an American administration committed to withdrawing from the Paris climate agreement.

"The work to consolidate various opinions is expected to be difficult," a Japanese official admitted to reporters Thursday.

A French source said Washington was trying to bring some countries over to its side and appeared less isolated than before on environmental issues.

Looming over the talks was also the continuing tensions in the Middle East, but here too Trump seemed to step back from more bellicose recent rhetoric saying there was "no rush" to solve the crisis that has sparked fears of a military conflict in the Gulf.

We'll not accept the 4% salary increment — Coalition agains...
36 minutes ago