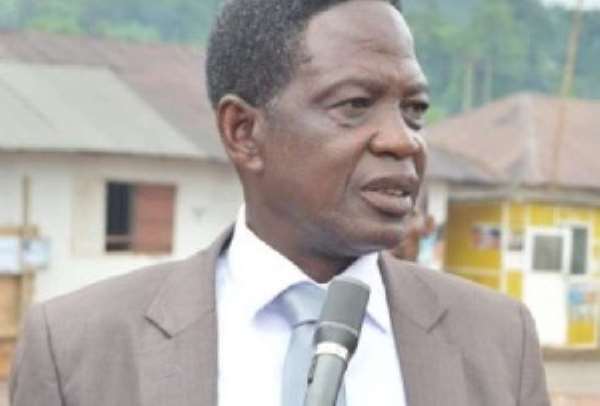 Mr. Ahlidzi Stephen, the Assemblyman for Gbledi Electoral area at a press conference alleged that since the appointment of Mr Teddy Ofori, in 2017, there was nothing to boast of as an initiative of the Assembly and achievement of the MCE thus must be shown the exit.

He alleged that the Assembly’s heavy equipment was just lying at the Assembly premises without repairs, with bad roads all over the Municipality.

Mr Ahlidzi also alleged that the MCE failed to consult the General Assembly in the formation of the “One District One Factory” (1D1F) Committee and selection of factory types most suitable for the Municipality, with other issues of lack of transparency and accountability.

He alleged that the MCE also took delivery of some street lights without the knowledge of Assembly members and distributed the items without due process with a few wasting away in the Assembly’s stores.

Mr. Ahlidzi again alleged that the MCE acted contrary to Act 936 of the 1992 constitution when he said in his sessional address on September 27, 2018, paragraph five that a budget estimate had been forwarded to the Regional Coordinating Council for harmonisation and had been consolidated into the national budget when the Assembly’s budget had not been discussed and approved by the General Assembly.

He said the actions and inactions of the MCE did not build any hope of trust and confidence, instead, dividing workers at the Assembly and the Municipality.

Meanwhile, Mr. Andrews Teddy Ofori, the Hohoe Municipal Chief Executive said facts on the ground did not support the demand for his removal by a section of Assembly members alleging inactivity and incompetence since his appointment to that position.

He said contrarily, his administration had been adjudged best managing Assembly in the Volta region for five consecutive times indicating, it was doing well.

He said the heavy duty equipment were dysfunctional when he came to office and that efforts were being made to settle the accumulated debts from repair works and put the equipment back on road.

Mr Teddy Ofori said a committee was set to address the issues and chart a way forward after attempts to privatise the equipment failed due to lack of cooperation.

The MCE said Hohoe was yet to benefit under the “One District One Factory” initiative but was engaging some investors for similar projects.

He said guidelines were given for selecting committee and statutory members to ensure that due processes were followed and that it was not true that he was doing things unilaterally.

On the electoral area street lighting project, he said another offer came to the Assembly, for which reason the distribution was temporarily stopped, saying everything was intact in the stores.