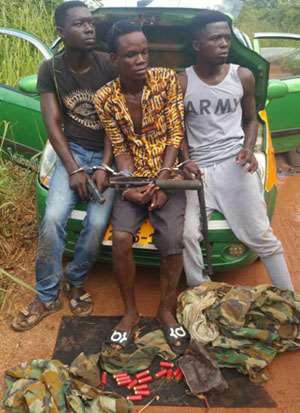 The Police in Jacobu in the Ashanti Region have nabbed suspected armed robbers with a number of telltale items including military accoutrements.

Following information that some armed persons were aboard a Daewoo Matiz taxi with registration number BA 2855-17 and proceeding from the direction of Obuasi and heading for a mining site in Korbo near Jacobu, the police headed for the location.

On board the said taxi cab were Emmanuel Mensah, aka Mawuli, 19 and Prince Adjei, 24, driver.

A search of the car revealed a dismantled pump action firearm, 27 BB live cartridges, one foreign pistol, two sets of military uniforms, 17 plastic disposable rubber handcuffs and one machete concealed in the inner parts of the taxi's door.

The Police eventually traced and arrested a certain Prince Arhin Afful, said to be the leader of the gang at Aboagyekrom who had a cutter and some cloths in a bag.

Investigations have already begun as the suspects are detained by the Jacobu Police.