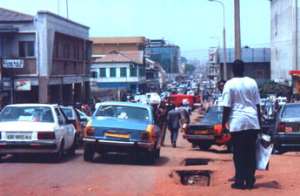 Accra, Jan. 28, GNA - Hundreds of Ghanaians from all walks of life on Saturday undertook a cleanup exercise that lasted for more than the five hours the Accra Metropolitan Assembly (AMA) prescribed. In market areas such as Kaneshie, Agbogbloshie, Salaga, Abossey Okai Spare Parts and the Central Business District, commercial activities came to a halt from the early hours of the day to mid-day to pave the way for the cleanup exercise.

Stranded passengers in these areas also had to trek long distances to reach their destinations to either partake in the exercise or wait aloof for the clock to strike 1200 for businesses to begin. Vice President Aliu Mahamah led a Government team comprising Sheik I. C. Quaye, Greater Accra Regional Minister; Major Courage Quashigah (rtd), Minister of Health; Mr Charles Bintim Minister of Local Government and Rural Development; Madam Theresa A. Tagoe, Deputy Minister, Lands, Forestry and Mines and Mr Stanley Adjiri-Blankson, Chief Executive of AMA among other dignitaries. They were cheered wherever they stopped to encourage and interact with those working. There were, however, a number of people, who showed apathy and disregard toward the leadership when they stopped to interact or when the convoy went by.

The delegation helped in cleaning up at the Central Business District and witnessed the exercise at the Makola Market through Katamanto, UTC to Salaga Market. They continued to Agbogbloshie Market to Abossey Okai Spare Parts Area and to the proposed Hawkers Market at the Kwame Nkrumah Circle. The inspection and interaction with residents finally ended at Alajo.

The team passed through Pig Farm, 37 Military Hospital Area, through Ako Adjei Interchange to Osu Oxford Street through Osu Alata, Castle Road to the AMA Offices where the programme came to an end at exactly 1255 hours. In the course of the exercise the number of official vehicles from Government Department and Agencies that joined the Vice President's convoy kept on increasing making the whole inspection team look like a carnival.

By every stretch of imagination the exercise would go down as one of the most successful mass activity to be seen in the Metropolis in recent times as residents came out in their numbers to participate. One only hopes that AMA would be able to collect the heaps of garbage that have been collected. AMA said it had to wait for the water to drain out before they could do so due to the weight.

Election 2020: Challenging My Opponent's Identity Will Not S...
10 minutes ago