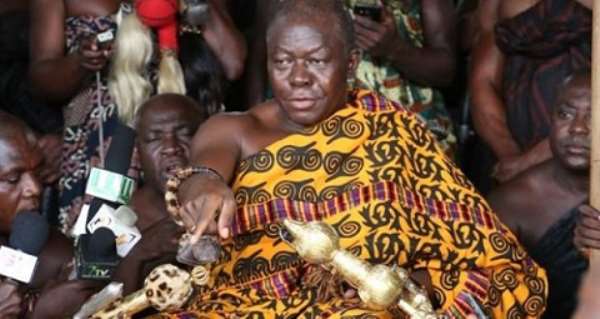 Chiefs in the Ashanti Kingdom have been gripped with fear following the destoolment of Asafohene, Akyamfour Kwame Akowuah III, who was the head of Akwamu Division of the Kumasi Traditional Council (KTC), by the Asantehene Otumfuo Osei Tutu II, last week Thursday.

The Asafohene, who ruled for eight years, was destooled for gross insubordination towards the Manhyia Palace, particularly flouting the great oath of the Golden Stool, ‘ntamkese’, one of the pillars of the kingdom.

He was destooled for illegal sales of lands, a disrespect to Manhyia and his kingmakers.

His destoolment came as a surprise to most of the chiefs who thought considering his status at Manhyia, he would be forgiven by the Asantehene.

Asantehene, occupant of the Golden Stool delegated some of his powers to Akyamfour to act on his behalf at Asafo.

The chief of Offinso-Ahenkro, who also ruled for 20years, was among other things destooled for taking lands disputes cases to court, instead of Manhyia Palace, a situation Manhyia treats as ‘disrespectful”, which undermines the power of Manhyia.

The Asantehene delivering final judgments during both cases at the Palace said he will not show mercy to any chief found guilty of illegal sales of lands and settling chieftaincy disputes at the law court, one of the major issues that confronted him when he was enthroned as the 16th occupant of the Golden Stool.

The decision, according to interviews conducted by this reporter in Kumasi, people claim most of the chiefs in Asanteman are hiding behind the Asantehene to ‘bully’ them and engaging in illegal sales of lands, illegal installing and destooling of sub-chiefs.

They were convinced that destooling the “disobedient” chiefs will bring sanity in the chieftaincy.

The Asantehene, since his assumption was able to withdraw and settled all chieftaincy cases at the law courts in his twenty-year rule, and issued warning to all his subjects not to send cases regarding chieftaincy to court in his kingdom but that has been flouted by some chiefs.

The Asantehene has vowed to protect the 400-year-old customs and traditions of Asanteman that have guided and helped his kingdom to be one of the powerful and fearful in the world’s history, indicating that any chief, who, irrespective of his status, goes contrary to the customs and traditions, will be stripped 'naked.'