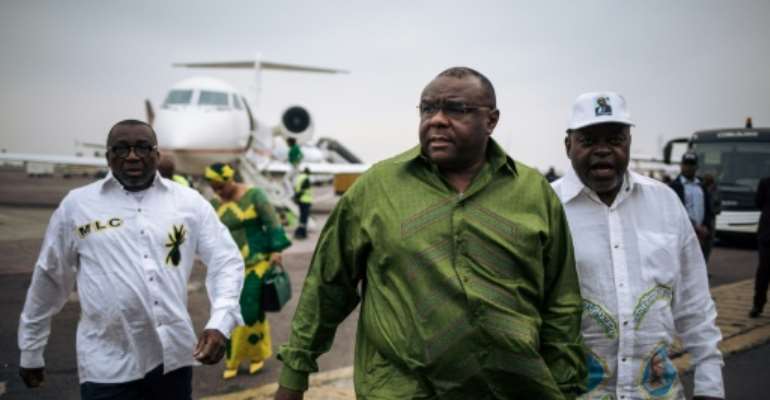 Police in the Democratic Republic of Congo fired tear gas at protesters against a visit Sunday by opposition leader Jean-Pierre Bemba who made a low-key return home, flying in from Brussels on a private jet.

Bemba's allies said he had returned to the DR Congo to lend support to another opposition figure, Martin Fayulu, who maintains he was robbed of victory in last December's presidential election.

After that vote, another opposition figure Felix Tshisekedi was declared the new president in the country's first peaceful transition of power since independence from Belgium in 1960, but the vote was marred by allegations of ballot-rigging.

Police on Sunday fired tear gas to break up rock-throwing protesters who targeted Bemba's convoy as it arrived from the airport to Kinshasa's Sainte-Terese square where Bemba spoke, AFP correspondents at the scene said.

Some pelted Bemba's procession with rocks at the popular district square where thousands turned out to listen to the former warlord.

"Jean-Pierre Bemba returned to lend a hand to Martin Fayulu," Eve Bazaiba, a close Bemba ally said at the rally.

The crowd this time was far smaller than the thousands who turned out to greet Bemba the first time he returned from exile, in August last year, after 11 years out of the country.

On that occasion, Bemba only stayed a few days to file his candidacy for the presidential election. After the electoral commission rejected his candidacy, he threw his support behind Fayulu.

A former vice-president, Bemba ran unsuccessfully for the presidency against former leader Joseph Kabila in 2006.

He was then jailed by the International Criminal Court based in The Hague for alleged atrocities carried out by his troops in the Central African Republic.

But he was finally acquitted and freed on appeal in June 2018, when he returned to Belgium.

The opposition Lamuka coalition he has formed with Fayulu and another senior figure, the former governor of Katanga province, Moise Katumbi, is showing signs of strain.

Fayulu insists he only lost the presidency because a deal was agreed between outgoing president Kabila and the man who succeeded him, Tshisekedi.

Leaders of the Lamuka coalition are planning demonstrations next Sunday to protest against the Constitutional Court's ruling to invalidate the election of 20 of their deputies.