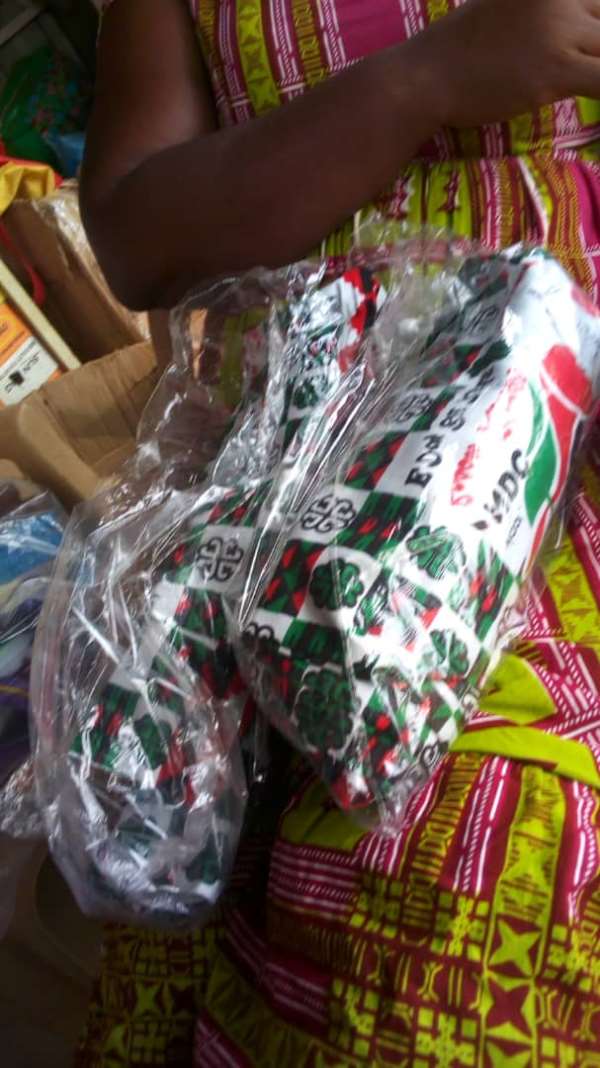 Kofi Adams has been engaging branch and constituency women organizers with lofty promises and gifts including NDC 2016 branded clothes and other party paraphernalia.

It would be recalled that soon after the NDC lost the 2016 elections, Kofi Adams was one of the NDC bigwigs that accused Members of Parliament and then parliamentary candidates for failing to share the party goodies given to them for the campaign.

He quickly attributed the Mahama popular defeat to the likes of candidates who he alleged kept some of the campaign materials which made the electorates reject the NDC and its presidential candidate in 2016.

But surprisingly two years after that accusation Kofi Adams popped up in Jasikan capital of Buem Constituency with the same campaign materials he claimed the then parliamentary candidates refused to distribute costing the party electoral fortunes.

The former National Organiser was caught by some members of the party happily distributing the party 2016 branded cloth.

Information emerging from Kofi Adams campaign grounds at Empire in Jasikan pointed out that, the NDC women are asking many questions as to where all these goodies were kept when they were needed most?

In addition to the cloth, each potential delegate received not less than GHS30.00, with a promise of soft loans to the women.

Besides the women organizers, Kofi Adams also planned to meet the branch and constituency Communicators, Organizers and other executives with similar lofty promises.

Further information picked from his campaign team members making round in the constituency indicated that he is bringing about 500 motorbikes and each delegate would take home not less than GHS1,000.00 on election day.

This made many of the constituents to become apprehensive as to where he got those plenty resources from, while he could not provide the same during the 2016 campaign for NDC to win power.