Nana Oye Lithur, Your Own Husband Calls You a Thief! 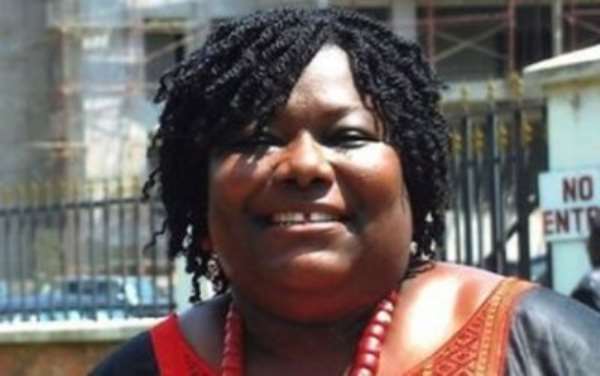 To many Ghanaians, until she was granted the privilege to serve as Minister for Women, Children and Gender Protection, or some such portfolio, Mrs. Nana Oye Lithur, was widely known as a women’s and children’s rights activist. But, now, to hear her own husband of some twenty-odd years tell it, the former Mills-Mahama cabinet appointee is a common criminal and an impudent thief who squirreled at least a half-million United States’ dollars out of Ghana for the purchase of a mansion abroad. South Africa, to be precise. What this very public accusation means is that the former Mahama appointee who recently met with her former boss to solicit his blessing and endorsement to run for a parliamentary seat, somewhere in the Greater-Accra Region, has absolutely no credibility and integrity to presume to impugn the credentials of President Addo Dankwa Akufo-Addo on the subject of women’s empowerment in the country.

You see, stealing the Ghanaian taxpayer’s money to purchase a mansion in South Africa, as we learned from from Mr. Anthony Lithur, to be certain, is no patriotic and responsible Ghanaian citizen’s idea of progressive and emulative leadership model for young women in the country who may be looking towards following in the footsteps of Mrs. Lithur. We know she is a common criminal and a thief precisely because of her own husband, who has also publicly demanded that her estranged wife explain to the entire nation precisely how she came by the aforesaid sum of money to purchase her private mansion in South Africa. So far, to the best of my knowledge, Mrs. Lithur has yet to explain the charge brought against by Mr. Lithur, reportedly, in the latter’s divorce papers. She has absolutely no other recourse or alternative but to affirm or deny both her alleged stealing of the Ghanaian taxpayer’s money and the illegal usage of the same to purchase an expensive mansion in a posh and upscale neighborhood in South Africa, in the leadup to the 2020 general election, if she wants to be taken seriously as a parliamentary candidate.

I have already discussed President Addo Dankwa Akufo-Addo’s frank talk on the generally nihilistic lethargy on the part of elite Ghanaian women towards their own empowerment in the political arena where, according to Nana Akufo-Addo, and indisputably so, the most significant and existentially far-reaching decisions are made: “We are talking about [heavy-lifting] decisions, not wishes and hopes; we are talking about decisions that are going to make a difference” in the destiny of all Ghanaian citizens across the board or without regard to ethnicity, religion and socioeconomic and political class status or affiliation (See “I Cried Over Akufo-Addo’s Comment About Ghanaian Women – Oye Lithur” Modernghana.com 6/7/19). Indeed, unless she is emotionally and mentally disturbed, or even clinically retarded intellectually, Nana Oye Lithur would rather be extolling and hailing Nana Akufo-Addo for putting his proverbial finger on the crux of some of the problems militating against the general upward mobility of Ghanaian women who, for the most part, have had to, almost to a person, desperately depend on the generosity and at the beck of their menfolk to be afforded significant appointments and socioeconomic privileges in the political arena.

Otherwise, why would Nana Oye Lithur have gone to former President John Dramani Mahama diffidently, on all fours, servilely seeking the latter’s approval to enable her to seriously and confidently gun for a parliamentary seat, rather than the leadership of some of the women’s rights and empowerment organizations and associations in the country, first and foremost, for approval and support for her political aspirations and ambitions? No example could better vindicate the President’s dead-on-target observation, that the Upper- and Upper-Middle Class Ghanaian woman has quite a long way to go in order to be able to pose a formidable political challenge to her menfolk and, with the latter, make herself an enviable force to be reckoned with and a progressive role-model for our youths, in particular our young women.