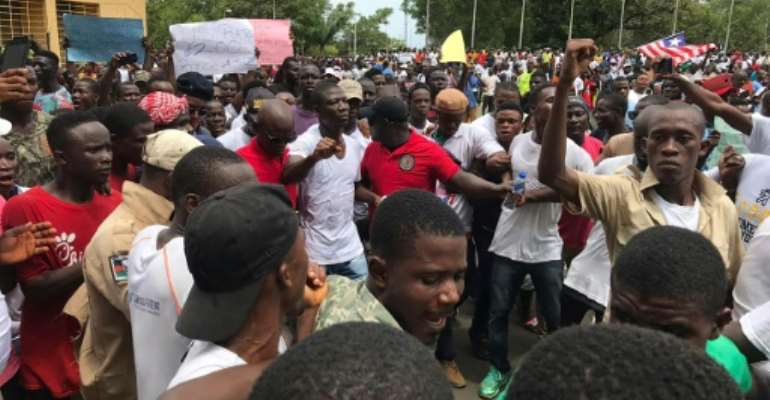 The protest was led by lawmaker Yeke Korlubah (centre, in white shirt), one of Weah's most vociferous critics. By CARIELLE DOE (AFP)

The football icon is being challenged over the same issues on which he campaigned in his rise to the presidency of the impoverished West African state just 18 months ago.

About 10,000 people took part in the demonstration, according to an AFP count, while a police official put the turnout at around 4,000.

Some held aloft placards reading: "We are tired of suffering" and "We want better living conditions."

The mood was upbeat, with people dancing and singing. But in a country traumatised by years of civil war, many braced for possible clashes, and some stocked up on food, fearing prolonged disruption.

"I am staying home to make sure that my kids don't get in the streets. I have good reasons to be scared. In the history of this country all of our big crises started with demonstrations and ended in serious violence," Mustafa Kanneh, 43, told AFP.

The UN's special envoy to West Africa and the Sahel, Mohammed Ibn Chambas, said last month he feared the authorities did not have the means to successfully manage large-scale protests.

"The capacity of the Liberian state is still quite limited... There are serious logistics and financial challenges," he told a local daily.

Riot police deployed outside an annex of the Capitol Building, the seat of the Liberian parliament. By CARIELLE DOE (AFP)

The coalition that organised the march, the Council of Patriots, comprises dozens of civil society groups as well as politicians.

On Thursday, Weah issued a statement defending his record, blaming past governments for the country's entrenched problems and sternly warning the protest organisers.

"You can say whatever you want to, but be warned that cusses, insults and incitement of violence will never again be permitted under my administration," he said.

Weah, 52, is revered in Liberia and beyond for blazing a trail for African footballers in Europe.

But he is struggling to revive a country that is one of the poorest in the world and still traumatised by back-to-back civil wars between 1989 and 2003 that claimed a quarter of a million lives.

Fingers are being pointed at past and present managers of the Central Bank of Liberia (CBL).

Charles Sirleaf -- the son of former president and Nobel laureate Ellen Johnson Sirleaf -- was detained in March with two other CBL figures.

An independent probe found no money was missing, but flagged "concerns regarding the overall accuracy and completeness of the CBL's internal records."

Thousands of demonstrators are expected in the capital of the impoverished West African state. By Valentina BRESCHI (AFP)

More irregularities came to light related to a cash injection of $25 million that Weah ordered in July 2018 to mop up excess Liberian dollars and bring inflation under control.

"We have done much over the short time to (address) bad conditions, which of course are not our making," he said Thursday.

"We met the hardship and inherited all the bad conditions and without making excuses, we are solving them."