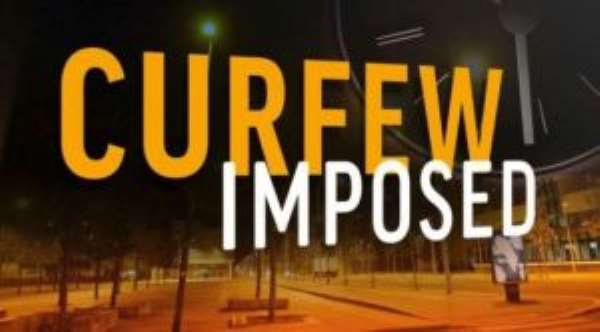 A curfew has been imposed on the Bole township in the Savannah Region, following chieftaincy violence that marred the Eid celebrations on Thursday.

The disturbances began, when some youth in the area invaded the praying ground, after the Imam who was supposed to lead prayers, declined to perform his role because of the chieftaincy dispute between two factions.

This resulted in the burning down of two houses and a pickup truck.

Speaking to Citi News, the Public Relations Officer for the Northern Regional Police Command, DSP Yussif Tanko said, the situation has been brought under control.

“If you remember, last year, the Chief of Bole passed away and his replacement brought a lot of controversies. Bole is very calm from this morning and also from yesterday evening.”

There was tension in the Bole traditional area in 2017 following fears of violence after the death of the Paramount Chief, Awuladese Pontomprong Mahama (II) on May 31, 2017.

The tensions were linked to supporters of two rival chiefs of Mandari, an important community within the traditional area where chiefs succeed the Bole Skin.

The relationship between the Bole paramountcy and the Ndewura Jakpa's palace allegedly deteriorated when the Yagbonwura refused to accept and recognize one Abdulai Issahaku Kant appointed by the Bolewura as chief of Mandari.

The Yagbonwura reportedly disregarded the Bole kingmakers and also named one Abubakari Abutu as Mandari chief, setting up two brothers from the same safope gate against themselves.

We'll not accept the 4% salary increment — Coalition agains...
12 minutes ago