Don’t Be A Gullible Believer 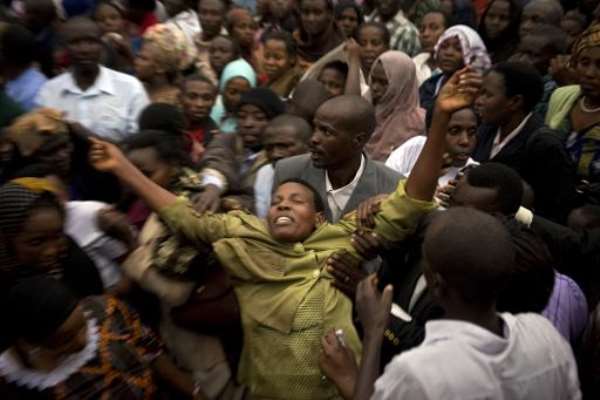 A person is said to be gullible if he or she is easily persuaded to believe something and shows too great a readiness to believe things. The adjective “gullible” originates from the verb “gull” which means “to fool or deceive someone”.

Myriads of people are vulnerable to false teachings, deception and exploitation simply because they don't examine the Scriptures regularly and diligently like the Jews of Berea in the first century. Regrettably, Africans happen to be the most gullible believers!

In September 2014, a South African preacher made his congregants eat grass “in order to be closer to God” before stamping on them.

In Kenya, a self-styled man of God persuaded his female congregants to come for Sunday service without any underwear “in order to be closer to God” so that “God can enter their bodies”.

In Nigeria, a 53-year-old fake pastor has been arrested for impregnating more than 20 members of his congregation, including married women and young girls, claiming the Holy Spirit commanded him to do so.

Zimbabwe, one of the poorest countries in the world, probably has the highest population of fake men of God in Africa. The poverty-stricken people of Zimbabwe are obsessed with these charlatans due to sheer religious gullibility.

Here in Ghana, the least said about the egregious demeanour of some self-styled and greedy pastors, the better. “Bukata”, to wit merciless exploitation, is at its zenith. Indeed, the manner in which the Bible is being used to dupe people in Christendom leaves a bitter taste in the mouth. Fake pastors are pulling the wool over the eyes of their gullible followers. Religion is an area where even the elite of society or intellectuals are easily hoodwinked and exploited by non-intellectuals. What a pity!

I'm not surprised Ghanaian Members of Parliament have descended heavily on 'one man' churches labelling their activities as “nuisance to people in areas they operate in and a prey on the vulnerability of their members”.

According to the lawmakers, it is time the state stepped in with a legislation to clamp down on what they consider to be an abuse of congregants under the clog of religion.

In fact, countless examples of religious absurdities abound on the African continent. No wonder some have become utterly disillusioned with religion.

It's noteworthy that one of the greatest gifts God has given to mankind is the ability to use the brain to think critically. To say the brain is a powerful organ is an understatement. Unfortunately, many Africans refuse to take advantage of this precious gift to achieve their ambition. Rather, they always depend heavily on “men of God” to think for them and find solutions to their problems.

Sadly, when it comes to religion, majority of people discard rationality, discernment and common sense. They are hurled into a befuddled state with deceptive utterances from so-called men of God such as “God has ordered me to tell you to . . .” “Holy Spirit has commanded me to instruct you to …” “Jesus is telling me to inform you to . . .” etc.

More seriously, some of these fake pastors sow seeds of enmity, division, suspicion and confusion among family members, by claiming a family member or a relative is responsible for one's predicament in life.

Outrageously, many even 'believe' in doctrines and practices they don't understand. My question is: what if they are being deceived with falsehood? For example, how many Christians in Christendom understand a doctrine like Trinity? How many of them can explain this doctrine?

Many so-called Christians regard their pastors as “tin gods”. These “tin gods” indoctrinate them with falsehoods to the extent that they can't even reason from the Scriptures. Due to brainwashing, their minds become highly corrupted.

Out of sheer religious gullibility, they would do whatever they are ordered to do by their pastors no matter how ridiculous and nonsensical it looks. Fake pastors cunningly capitalise on this regrettable situation to deceive and exploit their congregants big time.

The Apostle Luke wrote that the Jews of Berea were “more noble-minded than those in Thessalonica for they received the word with the greatest eagerness of mind, carefully examining the Scriptures daily as to whether these things were so” (Acts 17:10,11).

What made those Jews in Berea so noble-minded? When they heard a new teaching, they were not suspicious, harshly critical or gullible. Rather, they listened attentively, verified what they had learned by turning to the Scriptures, and diligently studied the Word of God daily with great “eagerness of mind”.

In fact, that was a shining example of spiritual noble-mindedness worthy of emulation. The Bible should be carefully examined so that our faith is solidly and solely based on God's Word and not on human teachings, philosophies and ideas.

It's most unfortunate that most Christians don't spend ample time to study the Bible diligently and regularly, thereby making them vulnerable to all kinds of false teachings. Due to biblical ignorance, they can't even ask their so-called pastors intelligent questions.

Truly, knowledge is power! It pays to be a knowledgeable believer. The Bible says it is not good to be without knowledge (Proverbs 19:2). In Hosea 4:6, Jehovah said: “For lack of knowledge, my people perish . . .”

In gaining knowledge, one gains strength. Besides, with knowledge, a believer can make wise and informed decisions or judgement. Hardly can that believer be deceived with false teachings, doctrines or practices.

George Bernard Shaw, an Irish playwright, once said: “Beware of false knowledge; it is more dangerous than ignorance”.

In principle, religion is good. True religion enables man to establish a good relationship with his Creator. However, the bane of mankind over the centuries has been the proliferation and practice of false religions in the world.

Many have been gulled into believing that God is pleased with every religion. On the contrary, Jehovah doesn't accept all religions simply because not all religions do His will. He has given us the Bible so that we can learn the right way to worship Him. Therefore, it's absolutely worthless to practise false religion!

It is noteworthy that not every traditional and popular religious belief, doctrine or practice is scriptural. Therefore, without diligently studying the Scriptures, there is no way one can identify and reject false teachings, doctrines or practices.

It takes noble-mindedness, wisdom, discernment and biblical knowledge to break away from religious deception and merciless exploitation by charlatans.

Notwithstanding the foregoing, there are good churches, true Christians and noble men of God who are genuinely doing the will of God in the Ghanaian society. They should keep up the good work. I hope and pray that they are not discouraged by the ignominious and reprehensible demeanour of fake pastors that is adversely affecting the image of Christianity and religion at large.

Don't be a gullible believer! Keep studying the Bible diligently and regularly like the Jews of Berea.