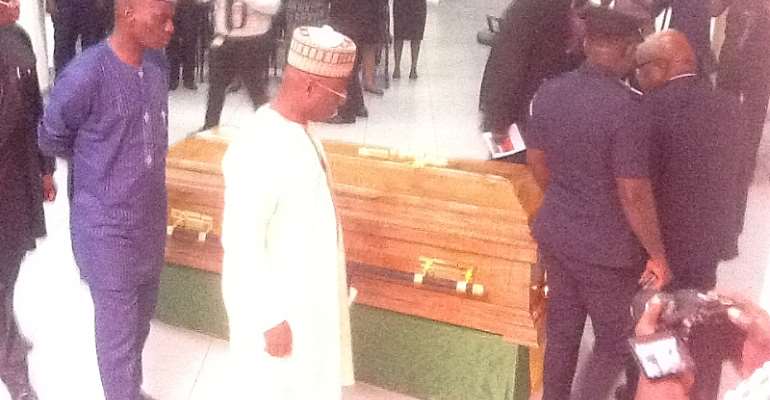 Speaker of Parliament Rt. Hon. Professor Aaron Mike Oquaye joined Members of the House including the Majority and Minority Leaders, Parliamentarians and staff of Parliament to file past as they paid their last respect to the former legislator.

According to him, late Dr. Kwabena Adjei has served the nation diligently worth emulating by Ghanaian politicians, especially persons who have had opportunity to work with him.

In his remarks, the Rt Hon Mike Oquaye described the late Kwabena Adjei as a man who lived his life without an element of corruption.

According to the Speaker, the late former Majority Leader and MP for Nkonya-Ntsumuru, served the nation through Parliament with an impeccable record, stating that he lived an unparalleled political life till his death.

Majority Leader, Hon Osei Kye-Mensah-Bonsu, said late Kwabena Adjei left a vacuum in Parliament that could not be fill and asked his colleague Parliamentarians to emulate the late former majority leader.

He described late Kwabena Adeji as a closed friend who made him understand the Ghanaian politics, stressing that , he was politically argumentative but logical leader in Parliament who knows how to handle issues within the august House.

Hon. Haruna Iddrisu, Minority Leader said the late Kwabena Adjei paid his due as lawmaker and party man for the NDC.

He described Kwabena Adjei as a father, senior brother and a friend who handled himself with high respect in politics.

He assured that the Minority members would join the family to give Dr Adjei befitting burial.

Mr Kofi Attoh, a former MP for Ho who led the family said, the burial and final funeral rite will take place at Nkonya/Ntsumuru, on 1st. June, 2019.

The family expressed gratitude to Parliament for recognising the late MP who live his life without blemish.

Dr Adjei died on Tuesday, 12 March 2019 after a long illness at the Ridge Hospital in Accra.

He is to be laid to rest tomorrow 1st June, 2019 at his hometown in Nkonya in the newly-created Oti region.

He also served as a Minister of Lands & Forestry, Minister of Food & Agriculture and former Majority Leader and Minister of Parliamentary Affairs in the 4th Republic under the Jerry John Rawlings regime.