Impact of Imperialism on Afrika Today

“Our lives begin to end the day we become silent about things that matter.” -Martin Luther King Jr.
By Jibril Mohamed 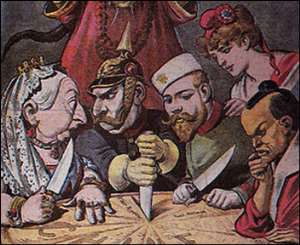 Today, Africa as a whole is behind in technological development and usage when compared to the rest of the world. Over the last few decades it has surged forward, but major parts of the continent are still struggling to catch up. All of this comes from the foundation set by the imperialistic colonialism.

Nothing was done to give the people a sense of being African or to lead Africa once they found independence. They were not prepared to develop Africa which should have been the responsibility of the colonist to teach them. The African people were left unprepared for their freedom and unprepared to become part of the larger world. In a sense, they found another form of slavery that could be argued to have been worse than anything they had experienced before. They would be enslaved by bad economics, poor technology, volatile politics, and undefined cultural identity.

Economic Issues
The lack of preparation from the colonist countries would lead to economic problems that pester much of Africa in the twenty-first century. Europe pulled out of the continent without any transition plan in place nor thought about putting any such plan in action, and Africa had to have an economy immediately. What Africa found was something they could not quite get a handle on.

They found themselves in debt. It was not anything they brought upon themselves. This road to deep debt began with the “adverse terms of trade established in the colonial period.” Africa was the source of wonderful products the rest of the world craved. Commodities where harvested, dug up, and exploited not to be used in Africa but to be taken to Europe.

Gold was found in abundance as was diamonds and other jewels. All of Europe craved such sparkles, but there was so much more in that vast continent to feed an ever developing Western world. Rubber had been discovered at the perfect time. Industrialization was exploding across the European continent. The advancements needed what African had to offer.

They were taken out of the land and used abroad. Africa had no basis to use their resources. They only knew how to extract them and send them over the waters. These resources were obtained cheaply so that Europe could sell at a high profit. Africa had no basis for a manufacturing economy or to be self-sustained in order to compete on that global stage as European colonialism “made African trade to be mainly export/import oriented.” Add to that the curse of freedom, and Africa was doomed.

Freedom can be dangerous when it is enjoyed too much. For Africa, this came in the form of “lavish and inappropriate spending” by the new governments who found themselves with gold and other resources sought after. Spending rose dramatically. The nations that would begin to find a firm footing were the ones who began to curtail the excessive spending and look to become self-sufficient instead of looking to Europe and beyond for their needs. They began to develop their own product but it came along too long after independence.

Technology Issues
Africa was technologically behind Europe when the first sailors set foot onto the land and discovered value that even Rome and Greece did not see in this vast land. They found labor resources, diamonds, gold, rubber, and ivory that would change the course of European economic history. What Europe did not realize was that it was a land of people with considerable potential. Africa was seen as a means to obtain wealth and status. In the end, Europe did more harm than good when it colonized the continent and disrupted various cultures that were advancing and had many attributes to give the world. Instead, Africa found itself struggling to find itself and keep its head above water once they got their own lives back. Problems never ceased once Europe began to meddle and control the dark continent.

Political Issues
Politics before European Imperialism was nothing like the West had ever known. Everything was based on tribal relations and didn’t extend too far. But Imperialism opened the door for long-distance interactions. Tribes were no longer restricted to interacting with those closer to them.

The development of infrastructure made the large continent not so small anymore. Railways and improved roads made the distance between villages smaller. Communication systems reached farther. Now the world had expanded for many African tribes which meant more political connections problems.

Add to all this the new ideas from Europe, and politics in Africa was drastically changing. No longer were tribes isolated. They were expanding and mingling with others. The individual identity of the tribes was being lost to that of a larger identity. Mix that with the Western ideas and politics was going to forever change.

Cultural Issues
European imperialism impacted the culture of Africa like nothing else ever had before. Imagine a bowl of blueberries sitting on a table minding its own business. Everything is fine until the bowl is turned upside down and strawberries are added to it. Now it is not so easy to identify one’s self.

Social
While not every tribe in Africa viewed itself as equal with another, it didn’t have the same concepts as the social discrimination changes the Europeans brought with them. But with the new cultures ruling Africa, the people who lived there found themselves in a whole new social world. They were not in control of their own lives in their own land.

Conclusion:
European imperialism turned Africa upside down. It took a continent and redivided it on every possible level from government to social interactions. It caused upheaval that is still felt today. The turmoil is still fully active. Wars are fought between Africans that can be traced back directly to the European imperialism. What would Africa be today if the Europeans had kept their noses out of it?