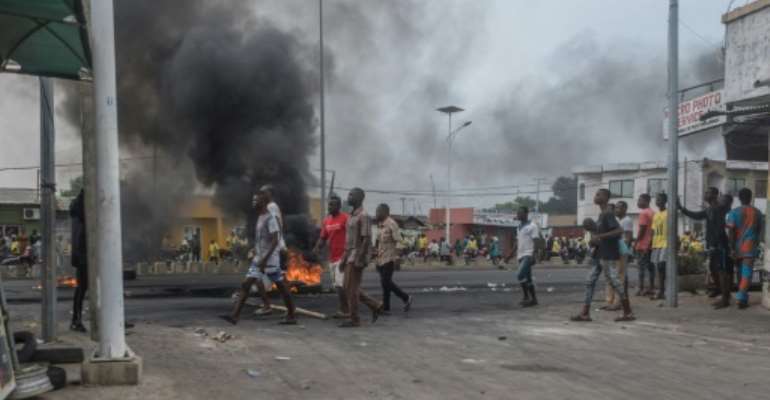 Protesters gather on the streets of Cadjehoun, the stronghold of former president of Benin Thomas Yayi Boni, on May 2, 2019 in Cotonou, Benin. By Yanick Folly (AFP/File)

"The repression reached disturbing levels in Benin where four people were killed during the post-election demonstrations, and the families of the victims are still struggling to recover their bodies," the rights group said in a statement.

"In Cotonou, the most populous city in the country, security forces carried out arbitrary arrests, causing serious injuries," it added.

According to Amnesty, systematic searches and interrogation of citizens were carried out in Cadjehoun district, where former President Boni Yayi resides, at the epicentre of the post-election violence.

The former head of state's home was still surrounded and under surveillance by security forces two weeks after the protests ended.

Violent demonstrations erupted in Benin a few days after the 28 April legislative elections, which took place without any opposition candidate. Changes to electoral rules had effectively barred opposition parties from fielding candidates.

The final results, showed that all seats were won by the only two parties allowed to take part -- both allied to President Patrice Talon.

Voter turnout was 27.1 percent, a record low since Benin transited to democracy nearly 30 years ago.

The results have raised concerns of an authoritarian turn in a country formerly known to be a democratic example in West Africa.

The 83 elected lawmakers from The Republican Bloc and The Progressive Union will take office on May 16 in Porto Novo.