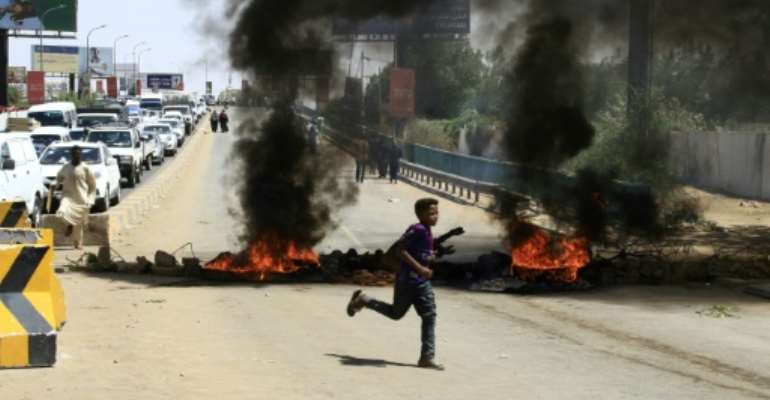 Sudanese demonstrators set fire to tyres to block a Khartoum road as the five-month protests show no signs of abating. By EBRAHIM HAMID (AFP)

As Sudanese protesters blocked roads with burning tyres in the city of Omdurman Tuesday, angry demonstrators at a Khartoum sit-in accused loyalists of ousted president Omar al-Bashir's of "dividing" the country.

Late on Monday an army major and five protesters died of gunshots in and around the Khartoum sit-in where thousands remain camped, particularly during the night, demanding the country's army rulers who took power after deposing Bashir step down.

"What happened yesterday was dirty work by the ousted regime," said protester Hisham Ali Sayed as he spoke to an AFP correspondent at the sit-in outside the army headquarters in central Khartoum on Tuesday.

"They are playing the game of dividing the people in order to control the situation."

During the day the number of protesters at the sit-in dwindles as many prefer to gather in the evening after the scorching heat subsides, and once they have broken their fast for the holy Muslim month of Ramadan. 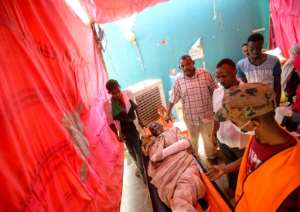 Hundreds however remain hunkered down at the site, braving the sun though taking shelter in make-shift tents erected since protesters launched their round-the-clock demonstration on April 6.

On Tuesday protesters also voiced anger at the chief of the ruling military council, General Abdel Fattah al-Burhan and against the Rapid Support Forces, a paramilitary group that is part of the armed forces.

"If Burhan doesn't handover the authority we will call on the International Criminal Court to try him like Bashir," said protester Aboud Hassan.

Bashir is wanted by the ICC in The Hague for war crimes, genocide and crimes against humanity for his alleged role in the conflict in Sudan's western region of Darfur.

Hassan said protesters no longer trusted the army even though the generals helped them in ending Bashir's iron-fisted rule of three decades on April 11. 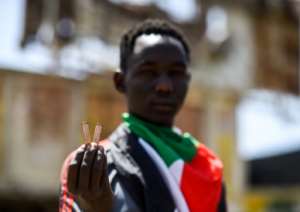 "We are not trusting those guys anymore. They are supposed to guard the protesters," he said, accusing the army of failing to protect demonstrators on Monday night when violence flared in and around the sit-in.

Behind him scores of protesters chanted "Blood for blood, we don't want compensation," a slogan calling for those guilty of killing demonstrators to face justice.

Since the sit-in began, protesters have also set up make-shift clinics and food centres.

"Yesterday, we were aided by surgeons, pharmacists and even Sudanese people who provided us with medicines," Neamat Kheder, a medic at a make-shift facility said, as he told how injured protesters were treated.

Some of those wounded in Monday's clashes were still being treated at the clinic, an AFP correspondent reported.

As day time temperature soared, a group of protesters were seen walking around carrying a long Sudanese flag over their heads and chanting: "We are staying, we are staying!" 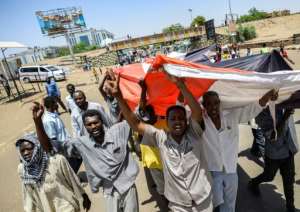 They were also cleaning up the streets outside the complex, collecting garbage in big plastic bags.

Meanwhile several areas of the capital saw traffic jams as Nile Street, a key avenue in the capital, remained blocked for the third consecutive day.

On Sunday protesters had blocked the avenue after clashing with security forces who stopped them from using it to reach the sit-in.

But new demonstrations were staged in the capital's twin city of Omdurman on Tuesday as scores of protesters blocked roads with burning tyres in some districts.

Omdurman had witnessed near daily demonstrations when nationwide protests erupted in December against Bashir's regime.

But for more than a month now it had remained quiet until early Tuesday.

"Protect your homeland or prepare to die!" chanted scores of protesters in Omdurman, witnesses told AFP.