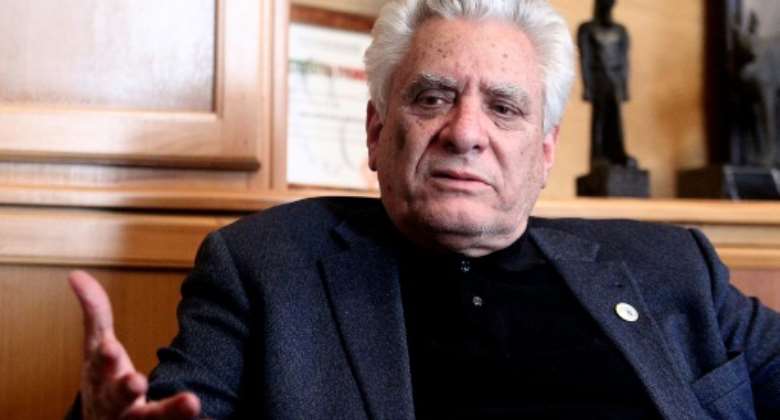 When asked whether he has a political bias, Algerian veteran lawyer and human rights activist Mustapha Bouchachi doesn't hesitate and replies: 'democracy.'. By - (AFP)

The young protesters "are finishing what my generation failed to do", said the man who became a mentor to demonstrators who have mobilised against "the system".

Bouchachi, in his mid-60s, has been careful not to try to "seize" the youth-driven movement even as he helped formulate its demands, notably in Facebook video clips that exceeded 200,000 views.

Whether speaking in his old-fashioned Algiers office or addressing university students, he has been tireless in explaining the goals of what he calls the "revolution of smiles".

"I am proud that many Algerians trust me, but this is the demonstration of young people," he told AFP, refusing the status of spokesman for the activists who ended Bouteflika's two-decade reign on April 2.

"We can accompany and give advice, but we must not steal" their movement, he said.

'I cried with joy'

Mass protests that led Algeria's ailing president Abdelaziz Bouteflika to step down last week after 20 years in power have grown into demands for broader political changes.. By RYAD KRAMDI (AFP)

Bouchachi's eyes filled with tears as he recalled his amazement when crowds of Algerians began to peacefully take to the streets on February 22.

"I was so afraid that there would be no-one, that we would just be a few thousand, isolated, like in 2011," he said, referring to the Arab Spring uprisings that started in Tunisia but largely bypassed Algeria.

This time around, he admitted, "I cried with joy", his grave face transforming into a deep smile.

He pointed to Algeria's 1962 independence from French colonial rule and said: "I told myself that it is these young people who will finish liberating the country, because our fathers liberated the land of Algeria but the people were not free."

Bouchachi was seven years old when his father was killed fighting in the independence war.

When asked whether he has a political bias, Bouchachi replied without hesitation: "democracy."

"You can't have politics in a totalitarian regime," he said. "All politicians must campaign for the rule of law, this is the priority. Only after that we can have debates between left and right."

Bouchachi studied law in Britain on a scholarship and graduated at the age of 25.

After defending victims of torture and arbitrary arrests during Algeria's civil war of 1992-2002, he found himself labelled a "lawyer of the Islamists".

But he stressed that he is "not selective in the fight against human rights violations", adding that "now I am being labelled a secular leftist".

From 2007 to 2012, he was president of the Algerian League for Human Rights, at a time when the regime was using a mix of repression and social measures to pre-empt street protests.

'Our only weapon is the peaceful nature of the demonstrations,' says rights activist Mustapha Bouchachi.. By RYAD KRAMDI (AFP)

He was elected to parliament in 2012 for the Front of Socialist Forces, on the promise of having "a forum to question ministers".

But when he found his questions remained unanswered, Bouchachi left the legislature in 2014 to go back to his legal practice.

In recent weeks he returned to the political scene where, backed by his four student children, he has been hammering home the message of non-violence.

"Our only weapon is the peaceful nature of the demonstrations," he told students.

Bouchachi has also urged young people to resist the temptation of wanting to sweep away all politicians and officials, including those in the opposition.

"You have to aim at the heads of the system," he said. "When they are gone, then we can get organised."

He now hopes for "nine months or a year of transition", a process he said must include youth who took the lead in the street protests as well as opposition parties, civil society and political leaders from the pre-Bouteflika era.

As for the army, he said, "you have to be pragmatic. It's a strong institution, we need them for the transition. But they must accompany, not interfere in, the people's affairs".