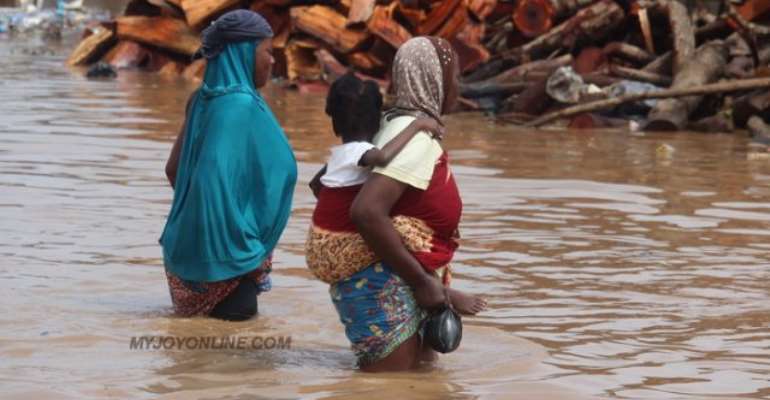 Atleast seven bodies have been retrieved from flood waters at different parts of the capital following Sunday’s April 14 heavy rains.

The National Disaster Management Organisation (NADMO) said four of the seven bodies were recovered from flood waters at Adjei-Kojo, a suburb of Accra.

NADMO sources explain that the four were part of a total of unidentified persons travelling in a military pick-up vehicle that veered off a bridge and plunged into rapid flood waters during Sunday night’s heavy downpour.

The truck was carrying several passengers in its bucket - all of whom were rescued. However, the four deceased persons were travelling in the cabin of the truck.

NADMO sources say the truck was swept away by the rapid waters before rescuers could get to them.

The truck submerged totally in the deep flood waters.

A NADMO-led search-and-rescue operation began around 9 pm Sunday night and continued until the last of the four bodies was recovered around 2 am Monday morning.

The Mayor of Tema, Felix Mensah Nii Anang-La, has been to the scene of some of the incident and was on the scene when the bodies were retrieved.

Also, three deceased persons include a six-year-old boy who drowned in Sakaman, add to the tally of lives lost following last nights downpour.