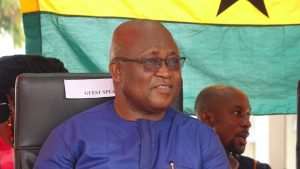 The Association of Ghana Industries (AGI) says it is worried about the increasing rate of graduate unemployment in the country.

Amidst government's new and existing interventions to help curb the problem of graduate unemployment in the country, the majority of graduates coming out of various universities remain unemployed three to four years after graduating, a development the AGI describes as very alarming and unfortunate.

According to the President of Association for Ghana Industries, Dr. Yaw Adu Gyamfi, government's lack of support for local industries and policies like the reduction in import values are making efforts of industries to help reduce graduate unemployment fruitless.

Dr Adu Gyamfi made these comments while addressing parents, graduands, and faculty members at the 15th Congregation of the Koforidua Technical University in the Eastern Region.

“Government policies do not favour industrial development and the biggest example is what happened just 2 weeks ago –the recent government policy on the reduction of import values by 50 percent for general goods and 30 percent for automobiles. What the government is saying is that for all the imports coming into the country, their value charges are being reduced by 50 percent and this by far means you are promoting importation rather than promoting local production”.

He added that, “as a result, there is going to be an influx of foreign goods in the country and this will continue to displace our locally manufactured products”.

“Another reason why industry is not able to provide employment for graduates is lack of government’s support for local industry. What happened to the 2017 Asempa budget which was read by the Minister of Finance? The lack of government’s fulfilment of its promises to businesses in Ghana does not give us the opportunity to guarantee jobs to our graduates. Lack of government’s support for local industry to get credit is really stampeding the growth of industries to create jobs for graduates. Government agencies overwhelmingly voluntarily support foreign agencies coming to do business in Ghana against local companies. And with this in mind, how would local businesses build opportunities to create jobs for our graduates”.

Dr Yaw Adu Gyamfi complained that “the situation is not the best.”

“Nigeria started a program 2 years ago, they made it their plan that by 2018 they will not import rice into their country and 100 percent of rice eaten in Nigeria were produced by Nigerians. And that will save them over 2.5 billion dollars in 2018. Ghana imported 1.2 billion dollars of rice into the country last year, how do we create jobs with this for graduands”.