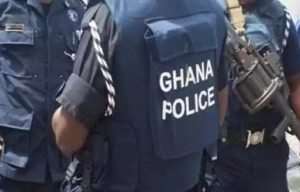 An Accra Circuit Court has asked a Police Constable Debi Sando to remain on his former bail of GH¢120,000.00 with two sureties to be justified.

The constable who appeared in court in clutches has been charged for allegedly attempting to snatch a Daewoo Matiz SE vehicle with registration number GG 4316-17, uber car from a driver with the help of two accomplices.

Constable Sando, who was granted GH¢120,000.00 had been discharged for want of prosecution was re-arrested and arraigned.

He has however pleaded not guilty to attempted robbery and will make his next appearance on May 2.

Meanwhile, his two accomplices are on the run.

Prosecuting, Police Chief Inspector William K. Boateng told the Court presided over by Mr Aboagye Tandoh that General Constable Sando was stationed at the Accra Regional Police Command and lived at Banana-Inn, a suburb of Accra.

He said on January 1, 2018, at about 2130 hours, the accused person and the two others engaged the services of Frank Owusu, the complainant in the case, who was in charge of the car, from the Kwame Nkrumah Circle to the Lartebiokorshie, also in Accra for a fee of GH¢15.00.

Chief Inspector Boateng said on reaching the Nkrumah Flats area, they ordered the driver to stop which he obliged despite the darkness of the place.

The Prosecution said General Constable Sando, who was at the front seat pointed a gun at the driver and asked him to step out of the car or else, he would shoot him.

The Prosecution said the accomplices, who were at the back seat also held him and a struggle ensued between them, where they sprayed pepper into his eyes but he managed to escape through the car's window.

Chief Inspector Boateng said Sando and his accomplices started the car but it failed to start.

The Prosecution said the complainant then raised an alarm and the three sensing danger tried to escape, however, luck eluded Constable Sando when an oncoming driver on noticing their actions knocked him down and sped-off.

He said Sando crawled into a nearby plantain farm but people who had come to the scene arrested him.

Mr Boateng said a Police patrol team was called in and Sando was handed over to the team.

He was rushed to the Police Hospital for treatment due to the injuries he had sustained.

The Prosecution said the pistol and pepper spray were picked from the scene and together with the vehicle and sent to the Police station.

He said after investigations Sando was charged and put before the court.