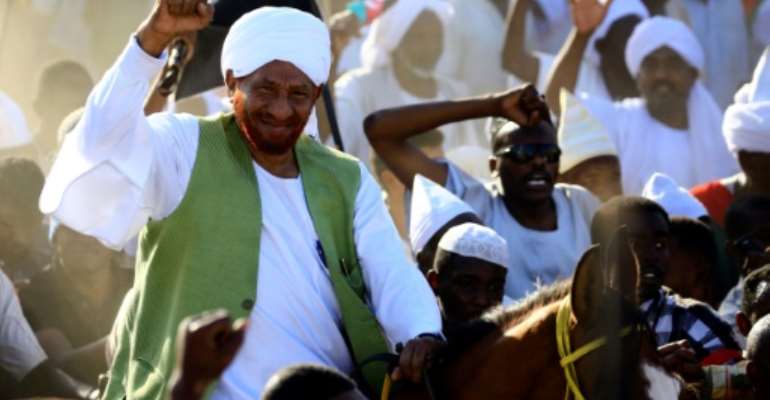 Sudanese opposition leader and ex-prime minister Sadiq al-Mahdi is greeted by supporters in Omdurman on January 26, 2017 as he returns from exile. By ASHRAF SHAZLY (AFP)

Sudan's top opposition leader on Friday urged President Omar al-Bashir to end a state of emergency and resign, calling for widespread rallies the next day against Bashir's 30-year rule.

"I call on all our people to participate in widespread rallies tomorrow, on April 6, to meet the call of their homeland," Mahdi told worshippers during the weekly Muslim prayers, according to a statement issued by his party.

"I call on President Bashir to resign, dissolve all consitutional institutions and form a council of 25 people to govern the country," he said.

Mahdi also told scores of worshippers at a mosque in Omdurman, the twin city of capital Khartoum, that Bashir should end a state of emergency he imposed in February in a bid to end protests that have rocked the country since December.

Witnesses said worshippers then staged a small demonstration outside the mosque but were quickly dispersed by police who fired teargas.

Bashir swept to power in an Islamist-backed coup in 1989 that toppled Mahdi's civilian government.

Mahdi has since spent several periods in exile, but returned to Sudan in December on the same day the protests began.

Late on Friday Bashir held a meeting with political allies and members of civil society groups where he said the issues concerning the country's youth need to be addressed.

"We need to have a dialogue with our youth, we have to go to them," said Bashir at the meeting held at the presidential palace in Khartoum.

"We need to have a dialogue about how the country can be ruled now and in the future."

The country's youths, majority of them women, have been at the forefront of the protests against his rule.

Anger had been mounting for years over soaring food prices and regular shortages of fuel and foreign currency.

It spilt onto the streets on December 19 following a government decision to triple the price of bread, quickly sparking nationwide rallies against Bashir's rule.

On February 22 Bashir imposed a state of emergency after an initial crackdown on protests failed to quell the demonstrations.

In recent weeks the protests have shrunk in scale and intensity, but organisers have called for nationwide rallies on Saturday.

Protest organisers chose April 6 for nationwide rallies as it was the day of a 1985 uprising that toppled the regime of president Jaafar Nimeiri.

The current protest movement was initially led by the Sudanese Professionals Association, but in late January Mahdi threw his support behind it.

Analysts say the movement has emerged as the biggest challenge faced by Bashir as yet.

The veteran leader has remained defiant however, imposing emergency rule and other tough measures that have seen protesters, opposition leaders, activists and journalists arrested.

Officials say 31 people have died in protest related violence so far, but Human Rights Watch has put the death toll at 51 including children and medics.