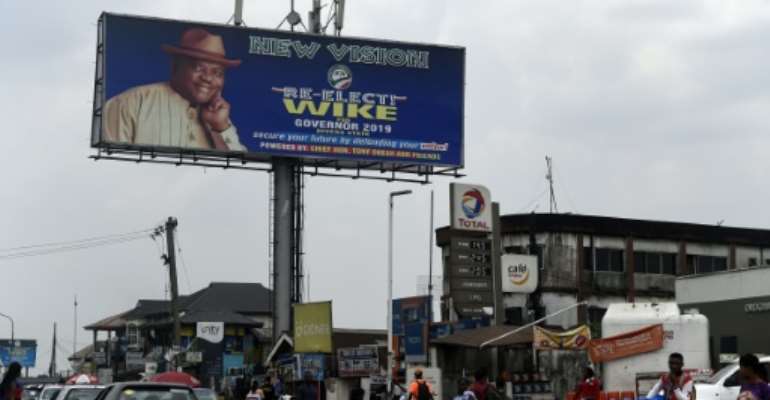 Wike dedicated his victory to people from the state

Nigeria's main opposition party has retained control of the key oil-producing state of Rivers, according to official results from a vote marred by violence and delay.

Incumbent governor Nyesom Wike, from the Peoples Democratic Party (PDP), was re-elected for a second term after winning 886,264 votes.

Awara -- a relative unknown -- was backed by President Muhammadu Buhari's ruling All Progressive Congress (APC), which was unable to field candidates due to a court ruling.

Wike dedicated his victory to people from the state "killed in defence of democracy", adding on Twitter: "They came with everything to destabilise us but we conquered."

The governorship election was held on March 9, two weeks after Buhari clinched a second term of office in a vote that beaten PDP candidate Atiku Abubakar has disputed and is challenging.

Collation of results in Rivers was suspended on March 10 because of violence and intimidation of election officials by men in uniform.

Roads were blocked around the building where election staff were counting votes, sparking a standoff with police who initially resisted with teargas but ultimately backed down.

Nigeria's military categorically denied the men were among its ranks and instead accused armed "political thugs" of impersonation to carry out the wishes of their sponsors.

Tensions and violence had already been running high before the vote because of the court ruling that barred APC candidates from standing, due to irregularities in the selection process.

Rivers is always a key battleground for the parties because of the lucrative oil and gas sector that is largely based in the southern delta region.

More than 50 people were killed during presidential and parliamentary polls on February 23, most of them in Rivers, according to election monitors.

Regional elections are fiercely contested in Nigeria, where governors are powerful and influential figures, controlling state finances and responsible for key areas from education to health.