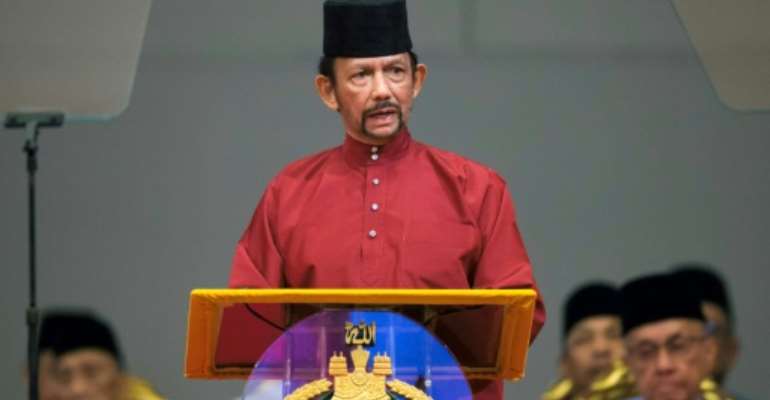 The tough penal code in the tiny country on tropical Borneo island -- ruled by the all-powerful Sultan Hassanal Bolkiah -- have fully came into force following years of delays. By - (AFP)

Brunei on Wednesday introduced harsh new sharia laws, including death by stoning for adultery and gay sex, despite a storm of global criticism from politicians, celebrities and rights groups.

The laws, which also include amputation of hands and feet for thieves, make Brunei the first place in East or Southeast Asia to have a sharia penal code at the national level, joining several mostly Middle Eastern countries such as Saudi Arabia.

Rape and robbery are also punishable by death under the code and many of the new laws, such as capital punishment for insulting the Prophet Mohammed, apply to non-Muslims as well as Muslims.

In a public address to mark a special date in the Muslim calendar, the sultan called for stronger Islamic teachings but did not mention the new penal code. By - (AFP)

The decision to push ahead with the punishments has sparked alarm around the world, with the United Nations labelling them "cruel and inhumane" and celebrities, led by actor George Clooney and pop star Elton John, calling for Brunei-owned hotels to be boycotted.

In a public address to mark a special date in the Muslim calendar, the sultan called for stronger Islamic teachings but did not mention the new penal code.

"I want to see Islamic teachings in this country grow stronger," he said in the nationally televised speech at a convention centre near the capital Bandar Seri Begawan.

George Clooney and Elton John are among those who have criticsed the new laws being introduced by the Sultan of Brunei Hassanal Bolkiah (C). By Valerie MACON, Karen BLEIER (AFP/File)

The sultan, who has been on the throne for over five decades, also insisted that Brunei was a "fair" country and the environment for visitors was "safe and harmonious".

Government officials later confirmed the laws had entered into force.

'Barbaric to the core'

The sharia laws have triggered worldwide condemnation, and Phil Robertson, deputy Asia director at Human Rights Watch, described the code as "barbaric to the core, imposing archaic punishments for acts that shouldn't even be crimes".

George Clooney and Elton John are among those who have criticsed the new laws being introduced by the Sultan of Brunei Hassanal Bolkiah (C). By (AFP)

The European Union said in a statement that some of the new punishments "amount to torture, acts of cruel, inhuman or degrading treatment".

They are particularly upsetting for the country's small lesbian, gay, bisexual and transgender (LGBT) community. Before the new laws, sex between men was already illegal in Brunei and punishable with up to 10 years in jail.

But the new code stipulates death by stoning as a punishment for sex between men, while women convicted of having sexual relations with other women face up to 40 strokes of the cane or a maximum 10-year jail term.

A 33-year-old gay Bruneian man, who spoke anonymously, said the new laws were "unfair, cruel and should not happen".

The new laws, which include death by stoning for gay sex and adultery as well as amputation of hands and feet for thieves, will make Brunei the first place in East or Southeast Asia to have a sharia penal code at the national level. By - (AFP)

"It really takes away my happiness and freedom to express myself, and depresses me so much," he told AFP.

Zulhelmi bin Mohamad, a transgender woman who fled Brunei last year and is seeking asylum in Canada, told AFP that the environment will be more terrifying for the country's LGBT community, who were already leading "very secretive" lives.

"Some worry a lot and would like to escape the country before they are found out not to be... heterosexual," the 19-year-old said.

Confirming the new penal code was now in force, a religious affairs ministry official told AFP: "The statement from the prime minister's office last weekend on (the code's) implementation prevails, hence (April 3) marks the date of its implementation."

A second government official, speaking anonymously, confirmed it had entered into force.

The Beverly Hills Hotel, seen here in 2014, is another Brunei-owned hotel. By Frederic J. BROWN (AFP/File)

The sultan -- who is one of the world's wealthiest men and lives in a vast, golden-domed palace -- announced plans for the code in 2013.

The first section was introduced in 2014 and included less stringent penalties, such as fines or jail terms for offences including indecent behaviour or skipping Friday prayers.

Clooney's call to boycott nine Brunei-owned hotels in Europe and the United States last week catapulted the issue into the international headlines.

Since then, a series of well-known figures have lined up to add their names to the chorus of condemnation.

The sultan, who is the world's second-longest reigning monarch, first called for the penal code in the late 1990s and it appears to enjoy broad support in the former British protectorate of about 400,000 people.

Analysts say he is seeking to burnish his Islamic credentials and shore up support among the country's conservatives due to the waning fortunes of the oil-dependent economy, which has been ravaged by recession in recent years.

It is also unclear whether death by stoning will actually be implemented, as a high burden of proof is needed to hand down the punishment and Brunei has not executed anyone for decades.