Ministers Agree On Measures To Promote Travel In Africa 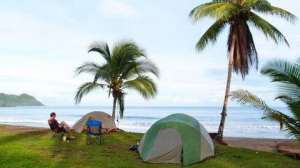 The first ICAO/UNWTO ministerial conference on tourism and air travel in Africa concluded in Sal, Cape Verde on Friday with more than 30 ministers and technical experts on aviation acknowledging the challenges of connectivity around the continent.

They also pledged concrete steps to fix it. Over the three-day conference, Ministers and officials dealing with air transport from Africa debated policies, concerns and challenges in being able to travel across the continent, especially for the purposes of travel.

“Tourism and air travel are like Siamese twins,” said Charles Banda, the President of the Executive Council at the UNWTO (UN World Tourism Organisation), as he closed the conference.

“You cannot separate one from the other. When tourism grows, so does air travel.”

Honourable Banda, who is also Zambia’s Minister for Tourism and arts told CGTN Africa that there was a consensus reached during the crucial meeting, and it was now up to the various government representatives to draw up proposals that can be adopted to make these intentions a reality.

“More than 1.3 billion tourists travel around the world every year. Of that number, Africa only gets about 68 million tourists annually, across all its 50 plus countries. What would happen if this number grew to just 100 million?” the minister posed.

Almost as if to drive the point home, many ministers who attended the conference, travelled for anything between 24 and 48 hours to arrive at the venue – a clear indication of the exact challenges facing the region.

“Along the East coast of Africa, where we have Ethiopia and Kenya, they have good connectivity. In Southern Africa, between Botswana, South Africa, Zimbabwe, their connectivity is also good. But the trouble comes when you venture towards West Africa,” according to Dr Jose da Silva Goncalves, Cape Verde’s Minister for Tourism and Transport.

The low numbers of travellers within the continent have often been blamed on the high costs of travel between African countries as well as visa restrictions.

The top ten strongest passports in Africa, ranked by the fewer number of countries where citizens need visas to travel, are in order: Seychelles, Mauritius, South Africa, Botswana, Lesotho, Eswatini, Malawi, Kenya, Namibia and the Gambia – as reflected in the 2018 Henley Index.

These, however , do not indicate the ease of travel by citizens of these countries within Africa.

The conference took place against the backdrop of a recent air tragedy where 157 people lost their lives when an Ethiopian Airlines plane crashed in northern Ethiopia early this month.

The crash resulted in the grounding of Boeing’s 737-800 Max planes, amid safety concerns. The issue of aircraft safety has also been brought into sharp focus at the conference, and measures that can be taken to ensure that resulting investigations can be sufficiently carried out on African soil.

The gathering was first of its kind and organised by the UN World Tourism Organisation and the authority for air safety in Africa, ICAO.

Some of the items in the draft plan of action reached by the states for implementation between 2019 and 2021 include a destination management strategy that combines tourism and travel to cut logistical challenges, institutionalising the Single African Air Transport Market (SAATM), integrating major aviation and tourism infrastructure projects and adopting visa openness solutions.