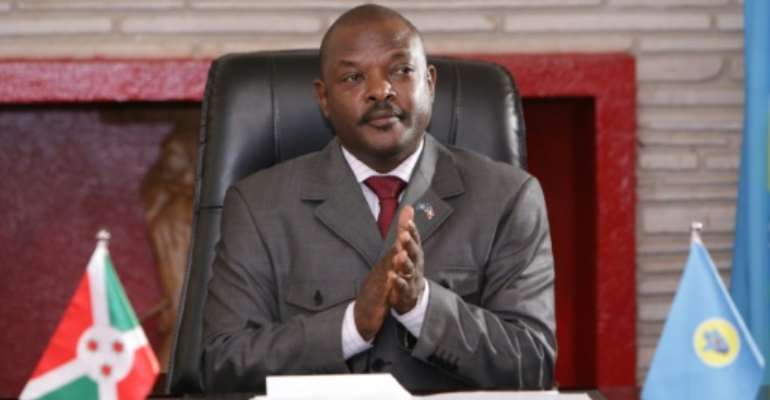 Three teenage girls had faced up to five years in prison for insulting Burundi President Pierre Nkurunziza (pictured June 2018) by drawing on his picture in their textbooks. By STR (AFP/File)

Three teenage schoolgirls jailed in Burundi for scribbling on a picture of President Pierre Nkurunziza in textbooks have been released on bail, their lawyer said Wednesday.

The arrest of the girls, aged 15, 16 and 17, who had faced up to five years in prison for insulting the head of state, sparked an international outcry.

"The three schoolgirls have been granted bail," their lawyer, Prosper Nyanzira, told AFP. "They have just left the juvenile prison where they were detained and were handed over to their parents."

The trio has been in custody since March 12. The girls had been accused of defacing photographs of Nkurunziza in five textbooks belonging to their school.

Since their arrest, activists have been sharing images of Nkurunziza covered in doodles, including drawings making the president look like a woman and a clown.

Burundi has been in turmoil since Nkurunziza in April 2015 sought a fiercely-contested third term in office.

The violence has claimed at least 1,200 lives and displaced more than 400,000 people between April 2015 and May 2017, according to estimates by the International Criminal Court (ICC), which has opened an investigation.