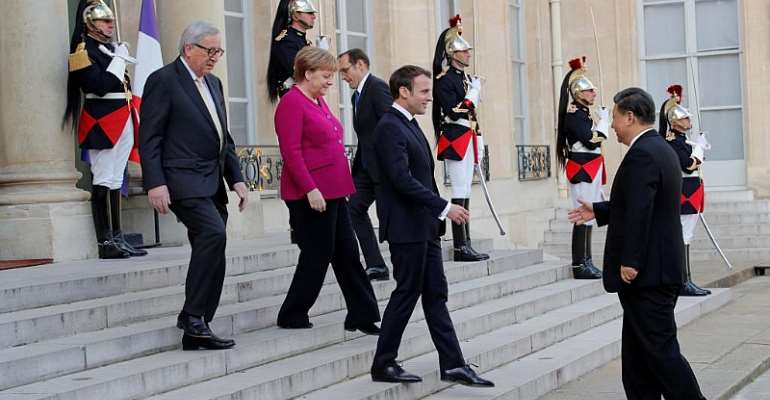 French president Emmanuel Macron urged his Chinese counterpart Xi Jinping to "respect the unity of the European Union" at a joint press conference following talks with the Chinese leader who is on an official visit to France.

For his part, Chinese President Xi Jinping said that China and Europe were "advancing together" but the two trading blocs needed to overcome "suspicions".

The statements followed talks between the two leaders, who were also joined on Tuesday morning in Paris by German Chancellor Angela Merkel and EU commission president Jean-Claude Juncker.

Last night Macron hosted a lavish state dinner for Xi, after the signing of a raft of trade deals.

Beijing committed to buying 290 Airbus 10 A350 airliners from Europe's Airbus conglomerate, in an upgrade of an original order, announced in January, for 184 A320s.

The French company, EDF also concluded an accord on a project for the final stages of an offshore wind farm at Dongtai, worth around a billion euros.

BNP Paribas signed a memorandum on the co-financing of Bank of China, which could be worth nearly 6 billion euros over the next 3 years.

Schneider Electric and Power Construction Corporation also agreed a deal and agreements were signed on cooperation in shipbuilding and the export of French poultry.

Macron wants to deepen EU ties with China while pushing back against Beijing's growing global clout.

Earlier on his trip, Xi visited Italy, which became the first G7 country to sign up to China's vast “New Silk Road” infrastructure, which has led to some unease within the European Union.

Although some member states are interested in the so-called Belt and Road project, others are wary of China's influence.

They worry that strategically important infrastructure such as power networks, harbours and key rail lines will be in Chinese hands.

Nevertheless, despite its concerns, the EU is keen to engage China as a closer partner.

"You Were Not A Vice President When MoMo Was Introduced 11ye...
25 minutes ago