...For Community Library And Borehole In Ghana's Eastern Region
By Dickson Boadi 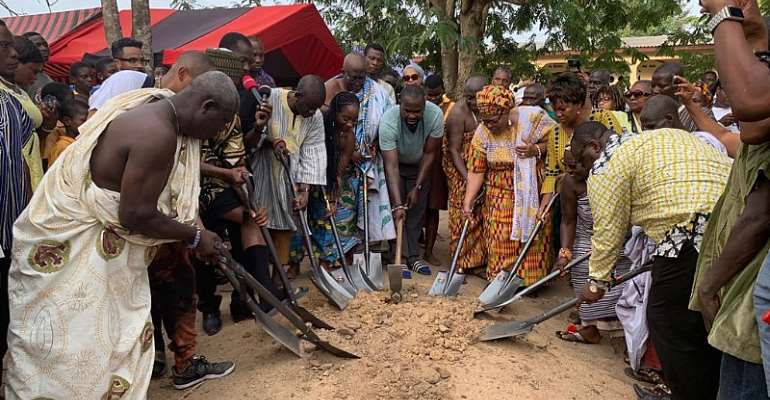 On 7th March, The Back2Africa Festival and Tour Service Day coincided with World Book Day, a day to promote reading, as the group of nearly 100 first time travellers to Ghana spent the day with the Akuapem Educational Service Partnership, at Nyame Bekyre School in Akuapim.

The day was also used to break grounds for the establishment of a library and borehole in the community.

The Back2Africa team worked in partnership with the International Partnership for Economic and Sustainable Development to raise funds and books for the future library.

The Service Day at Akuapim was the final activity in Back2Africa's 10-day schedule which included a calendar of arts, entertainment, cultural, and historic experiences at some of Ghana's most historic venues in Kumasi, Cape Coast and Accra.

“Back2Africa Festival and Tour is one way we are committed to rebuilding the connections between Africa and her diaspora ---culturally, spiritually and financially.

...As much as we want our group to enjoy Ghana, we also want to provide them with an opportunity to reassert their identities as Africans by giving back hence the launch of the Akuapem Educational Service Partnership where we made a commitment to impact the lives and education of the community through building a library and a borehole,” shares Diallo “Daheart” Sumbry, Founder of The Adinkra Group, an African Cultural Edutainment Resource and Consulting company based in Washington, DC and organisers of the Back2Africa festival.

The 2019 Back2Africa Festival and Tour was launched on the 26th of February at the Accra Tourist Information Centre for a welcoming communal festival called the “Akwaaba” Village featuring local Ghanaian homemade drinks and traditional fashion and artworks from local vendors.

The Festival continued in Accra with the Back2Africa edition of JustMusic for an intimate live performance featuring Raheem Devaughn & Wes Felton of The CrossRhodes, an Open Mic/Jam Session in partnership with the African American Association of Ghana (AAAG) and the Back2Africa Birthright Concert, a family-oriented event celebrating Africa's cultural legacy through traditional and modern African Dance, Drum and Theatre.

The Birthright concert was held at the National Theater was co-hosted by Ghanaian Actress Ama K. Abebrese and founder of the Adinkra Group, Mr. Diallo “Daheart” Sumbry.

From Accra, the group travelled to Cape Coast where they visited the historic slave dungeons that also included the Spirit of Resilience Concert and an emotional African Ancestry Reveal where travellers were given the results of their DNA ancestry.

“Back2Africa Festival and Tour served as an opportune occasion for us to reconnect with the culture and traditions of Ghana and also engage in a cross-cultural exchange with artists from both the US and Ghana including American socio-political musical duo, Raheem DeVaughn and Wes Felton who were visiting Ghana for the first time, intergenerational West African Drum and dance company, Farafina Kan, High life Sensation, Kwan Pa Music Band, Ghanaian actress Ama K. Abebrese, flutist Dela Botri, and the Ghana International School Ensemble,” adds Sumbry, a current and founding member of the Year of Return Steering Committee.

The Back2Africa Festival and Tour began in 2018 with a mission to reconnect people of the African Diaspora to the culture and traditions of Africa with a line-up of events that focuses on arts, performances, education and service projects in Ghana's most historic venues. The 2019 edition was a part of the “Year of Return” programming, a year-long calendar of activities in “celebration of the resilience of the African spirit” coordinated by Ghana Tourism Authority, under the auspices of the Ministry of Tourism, Arts and Culture. Back2Africa festival partners include South African Airways, SunSeekers Tour, WaxPrint Media, African American Association of Ghana (AAAG), Ghana International School (GIS) and African Ancestry.