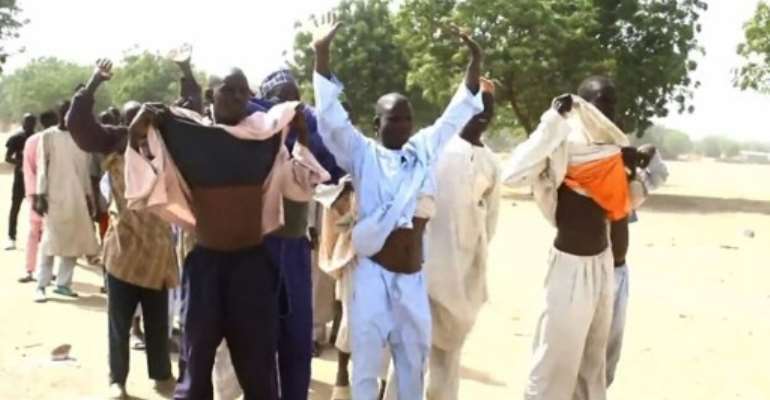 A total of 187 former jihadists from the district of Mayo-Sava, in Cameroon's Far North province, gave themselves up, many of them returning from Nigeria on foot. By Torrence OTTEN (AFP/File)

Nearly 200 Cameroonians who were members of Nigeria's Boko Haram jihadist group have returned home and surrendered to the authorities after breaking with the organisation, the government said Thursday.

A total of 187 former jihadists from the district of Mayo-Sava, in Cameroon's Far North province, gave themselves up, many of them returning from Nigeria on foot, provincial governor Midjiyawa Bakari said.

After surrendering to the authorities in the towns of Kolofata and Meme, they were enrolled in a programme to reintegrate them into society, he said.

They were taken on Wednesday to a base of the Multinational Joint Task Force (MMF), an anti-Boko Haram force combining soldiers from Chad, Cameroon, Niger, and Nigeria, he said.

"They don't represent any danger or any risk -- quite the opposite, everything will be put in place for them to resocialise, learn the spirit of patriotism and public duty," Bakari said.

About a thousand former jihadists, including children under 15, had already joined the reinsertion programme.

After being assessed to establish that they have definitively broken with Boko Haram, ex-fighters are taken to Mowoure, also in the Far North, where they are given farmland with which to earn a living.

Boko Haram's nearly 10-year insurgency is epicentred in northeast Nigeria, but spilled over into Niger and Cameroon as well as the Far North province.

It has left more than 27,000 people dead and about 1.8 million others homeless.