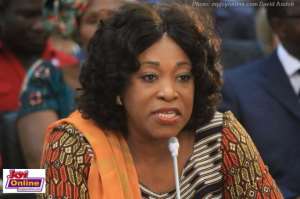 The Foreign Affairs Minister, Shirley Ayorkor Botchway, has given the assurance that work is ongoing to prevent current U.S. visa restrictions on Ghana from escalating after the initial 120-day deadline.

Although the U.S. Embassy has hinted that it could intensify the restrictions unless Ghana shows commitment to address the concerns, Madam Ayorkor Botchway said negotiations are ongoing to resolve the issue.

“One of the key aspects of the negotiation is for them for also to understand that we have a process to follow. That process is not an overnight process. Once they appreciate that, they will understand where we are coming from,” she said.

The Department of Homeland Security (DHS) of the United States announced the implementation of visa sanctions on Ghana at the start of this month.

In a release dated January 31, 2019, the DHS explained that the sanctions are as a result of Ghana’s failure to accept its nationals that have been removed from the U.S.

“Ghana has failed to live up to its obligations under international law to accept the return of its nationals ordered removed from the United States,” Secretary of Homeland Security Kirstjen Nielsen was quoted in the release.

“The United States routinely cooperates with foreign governments in documenting and accepting U.S. citizens when asked, as appropriate, as do the majority of countries in the world, but Ghana has failed to do so in this case. We hope the Ghanaian government will work with us to reconcile these deficiencies quickly,” the Secretary of Homeland Security added.

However, speaking to Joy News’ Joseph Opoku Gakpo on Wednesday, the Foreign Affairs Minister said Ghana has been very compliant.

“It is not a situation where, in the last few years, we have not issued any documents at all. We have. For a good number of them, I am told that...17 have already been processed. We are waiting for them to pick up what we have processed while we process the rest,” she said.

The restrictions will also limit the validity period and a number of entries on new tourist and business visas (B1, B2, and B1/B2) for all Ghanaian executive and legislative branch employees, their spouses, and their children under 21 to one-month, single-entry visas.

Visas issued prior to the effective date of these visa restrictions will also not be affected.