I.Coast parliament leader Soro steps down ahead of vote 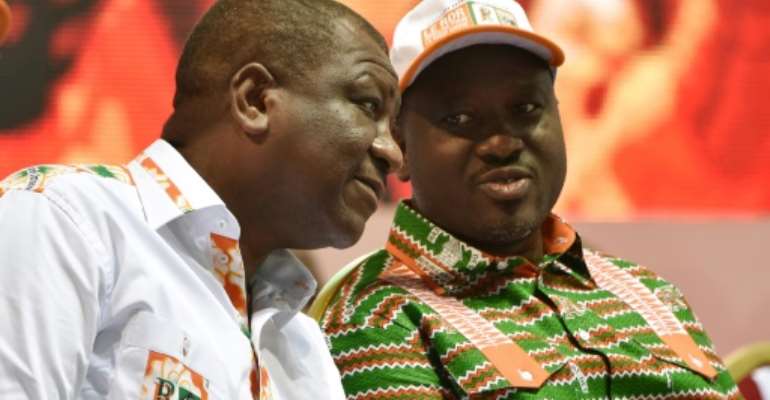 Former Ivorian rebel chief Guillaume Soro, seen here on the right, has said he is stepping down as parliamentary leader. By SIA KAMBOU (AFP/File)

Former Ivorian rebel Guillaume Soro on Friday said he was stepping down as head of the National Assembly amid rumours he may be harbouring his own presidential ambitions in the 2020 elections.

"I tender my resignation," Soro told lawmakers at a special session of parliament that he called.

The announcement came just over a week after President Alassane Outtara had trailed Soro's departure as president of the National Assembly, saying he "will resign in February".

Soro reputedly has a frosty relationship with Outtara, who pushed him to resign after he refused to throw his support behind changes to the ruling coalition.

Ouattara heads a new party, the Rally of Houphouetists for Democracy and Peace (RHDP), which draws part of its name from founding president Felix Houphouet-Boigny and includes the president's Rally of Republicans (RDR) with other forces.

Soro was reportedly not keen on the change and is now expected to declare himself a candidate in the 2020 presidential elections.

"Refusing to resign would provoke an institutional crisis," said Soro, who served as prime minister between 2007-2012.

"We cannot risk the fragile peace... to hold on to a job."