Rejoinder: The Challenges Of Exploiting Natural Resources In Africa 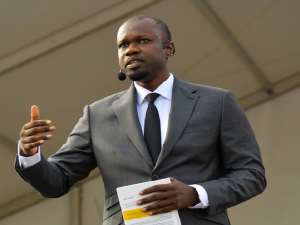 The attention of ModernGhana has been drawn to raging wild controversies making rounds and striking political chords within the territory of our Francophone West African neighbours, Senegal as a result of a publication concerning a young politician Ousmane Sonkom.

The article in question written by Michelle Damsen with the caption 'The Challenges Of Exploiting Natural Resources In Africa' has been already pulled down for lack of evidence but for reference sake and clarity, ModernGhana has found it necessary to react to the issue.

These are the key facts:
As any media organization we give room for opinion articles regardless of the writer's religion, belief, race or social status; we accommodate all people's opinions. The article with the above subject was treated as one of those public opinion writings. We have no agenda whatsoever against political events in Senegal.

ModernGhana has no interest in who becomes president in the next elections in Senegal The article was published as an opinion and opinions are not news but personal views of writers.

Our attention was drawn to some unsubstantiated allegations in the write-up and we immediately requested for more information. But unfortunately, the author couldn't provide us with. So we have no choice but to remove it.

We present the key messages from our correspondence with the Writer to further help in clearing our name.

So we think the author was an imposter.

Message to the author for more proof of his allegation


The story is pulldown for more evidence. Can you provide us with concrete evidence to back the story?

Because this part is a serious allegation

A young prodigy from Senegal politics, Ousmane Sonko, former tax inspector, has already benefited from the financial assistance of a large European company aimed at securing him a successful election campaign in return for offers of attractive oil contracts.

Sure as soon as I get to the office I will send you all related documents.

The author never came back with any concrete evidence to back his case.

Below is the original publication

The challenges of exploiting natural resources in Africa

By Michelle Damsen
As oil strikes in Africa occur with increasing frequency, American and European oil giants are competing on a continent that they previously abandoned.

Following the September 11 attacks in the United States, the Bush administration decide to encourage American companies based in the Gulf to look towards Africa – America also decided to get tough with Gulf States that promoted terrorism.

However, most of the African States whose land is incredibly rich in natural resources are buckling under the weight of corruption, to which politicians become prey, especially at election time.

The American giant corporations behind this surge in power in Africa are finding themselves in difficult situations when competing with certain Chinese, European, and even African companies, whose notion of ethics – for all practical purposes – does not exist.

The American companies, under the watchful eye of the US SECURITIES AND EXCHANGE COMMISSION, now appear to be the big losers in a project where they were once the pioneers.

Senegal, a small country in West Africa, currently in the throes of an election period, seems to be a perfect illustration of a dramatic situation. European and Chinese companies who claim to have been sidelined by the current regime are lining up in support of the incumbent president's serious challengers in the hope of benefiting from Senegalese oil and gas – Former Senegalese energy minister and possible presidential candidate Thierno Sall finds himself being courted by companies he worked with when he was the current president's minister for energy.

A young prodigy from Senegal politics, Ousmane Sonko, former tax inspector, has already benefited from the financial assistance of a large European company aimed at securing him a successful election campaign in return for offers of attractive oil contracts.

Faced with situations such as these, must America, under the tutelage of the S.E.C., continue to be the last in line when it comes to African discoveries?