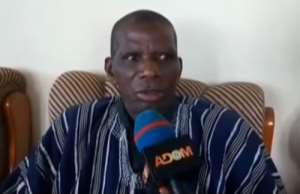 The headmaster of Nkwanta Senior High School has clarified media reports which indicated that some male students raped teachers' wives and female teachers.

Barely 24 hours after the news had gone viral, the headmaster Paul Boafo Nyarko, clarified that what he meant to say was “threat and not actual rape.”

He explained that although no one had been raped, about two teachers whose homes were vandalised had their wives threatened with rape by the students. Some female teachers also complained that some students threatened to rape them.

The headmaster made the clarification resulting from news that went viral that he had accused some of his male students of rape.

The headmaster had alleged in a video showing his interview with an Accra-based television station that some male students of the school had raped wives of teachers and some female teachers. The allegations of headmaster in the video was in response to the reason behind teachers' reluctance to resume teaching at the Nkwanta SHS after students went on a riot last Monday, October 29, 2018.

According to him, the threats, coupled with the vandalism of school properties and personal properties of teachers, have traumatised most of the teachers who claimed they would need a month to recover.

The Nkwanta SHS was closed down last Tuesday after students went on the rampage the previous night to protest the seizure of their mobile phones and gadgets.

The rampage saw the students beating up some teachers, ransacking bungalows, destroying power and water lines, destroying over 20 motorbikes, windscreens of four vehicles including a police vehicle, among others. Thirty of the students, all male, were arrested and later bailed to assist the police in their investigations.

The school which was closed down indefinitely after the rampage was re-opened on Monday, October 5, 2018, to allow final year students to register for the upcoming West African Senior Secondary Certificate Examination (WASSCE), while the form one and two students begin their studies.

However, when the students got to campus the teachers served notice that they were not in the right frame of mind and a good position to teach due to psychological trauma from the unfortunate incident. They therefore asked the Ghana Education Service (GES) to give them a month to recover and also provided with some psychological therapy to help them recover in good time.

One of the teachers is reported to have said, “We cannot stand in front of them and teach while a student has threatened the teacher just because he is ensuring that the right thing is done.”

Responding to the claims of the teachers, the headmaster, Paul Boafo Nyarko, described their request as justified as students went as far as “threatening to rape teachers' wives and female teachers on campus.” As a result, the teachers have gone through a lot of psychological trauma,” he added.

He added “so before they can go and stand in front of the students to teach them they need a psychotherapist to come and take them through all those things so that they will be able to re-psyche themselves before they can go back to the classroom.”

Although the GES is yet to meet the requests of the teachers, the headmaster says they are still in talks with the teachers to return to class.

Court issues warrant for arrest of Xavier Sosu for 'disrespe...
25 minutes ago