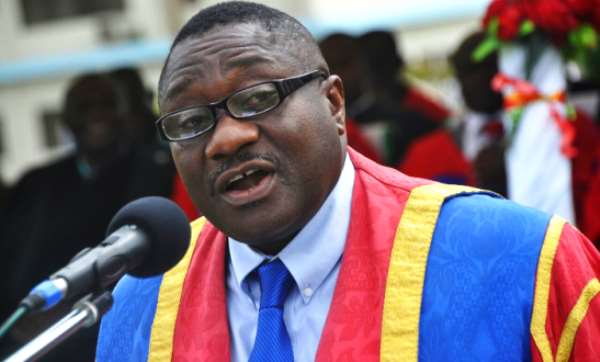 Ghanaians could recall that, during the 2012 election petition at the supreme court, JSC William Atuguba warned the media and some lawyers from carrying out inaccurate reportage from the court room. One of these lawyers who was told to desist from going out to mislead the public concerning the happenings in court was Mr Abraham Amaliba who was part of the NDC legal team. Yesterday Eduzi kudzo Tamakloe decided to poison the minds of the ordinary Ghanaian on a matter before the apex court. Citinewsroom.com and others also decided to join the misleading crusade by publishing same on their news portal with a caption" *Supreme court quashes high court ruling on Avoke's removal as UEW VC*".

For the avoidance of doubt, Prof.Mawutor Avoke's removal had nothing to do with the high court decision which was subsequently challenged at the supreme court of Ghana. The high court never ordered for the removal of Prof Mawutor Avoke. The recent ruling of the supreme court quashed the high court ruling on the basis that, the individual involved should have been giving the ample time to be heard in person with regards to allegation of procurement violation which was levelled against him by Mr. Supi Kwayera( plaintiff). After the court ruling which pronounced him guilty in respect of the offense he was alleged to have committed which was criminal in nature, the governing council of UEW per their mandate as stated in UEW Act,2004(Act 672) constituted a disciplinary board under section 7(2) Of Act 672) to investigate him on same procurement violation.It is also instructive to note that, the high court ruling was not the basis upon which the governing council removed him from office. He was removed based on the recommendation made by the disciplinary board.

If at this stage,some people are still finding it difficult to come into terms with the fact surrounding this issue but would only rely on misleading reportage of some media outlet(s) for reasons best known to them, then it is their own cup of gari. This same Edudzi Kudzo Tamakloe who took to his facebook wall and told Ghanaians that,the supreme court ruling yesterday is same as reinstatement failed to appreciate the fact that, Prof. Mawutor Avoke was not removed by the high court but rather UEW governing council whose decision wasnt the subject matter before the apex court. According to Mr Tamakloe a ruling on application for certiorari is a reinstatement.!. These are the kind of lawyers we have in this country.!

I am happy that professor Raymond Atuguba whose write up on this ruling was circulated yesterday has denied authorship through his colleague lawyer,Justice Srem Sai who is a lecturer at the GIMPA faculty of law Out of shame. If he claims he isnt the one who wrote the article, he should be bold enough to come out with a rejoinder. You and I could recall that, a day before the investiture of Rev.Prof.Anthony Afful Broni, same person issued an article "purporting" to advice his excellency the president to stay away from the induction because there was a matter before the supreme court when it was clear to him that, Rev.Afful Broni's investiture and induction wasnt the subject before the supreme court of Ghana.