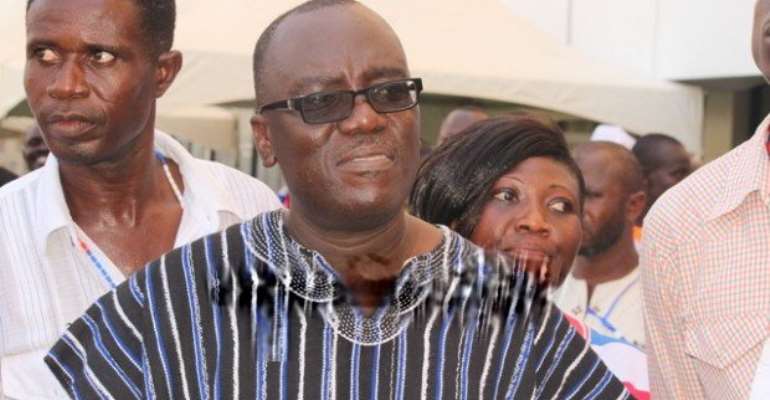 In a failed attempt to cause disaffection to the western Regional Minister and MP for Sefwi Wiawso constituency, The C.E.O of the forestry commission has succeeded in kiling the party's support base within the western north. On 14th October,2018, my article captioned" Kwadwo Owusu Afriyie(Sir John) is deliberately collapsing NPP within the Western North" was published on Modern Ghana.com. I wouldnt want to rehash the chronology of events which took place within the western north where party executives within the eight constituencies were forced to organise a serious press conference in respect of the said operation.

Today, the mischief behind the forestry task force sanctioned under the authori,ty of Mr Kwadwo Owusu Afriyie is going to be unveiled.For the avoidance of doubt i wish to state clearly without equivocation that, nobody is against the fight geared towards protecting our natural resources from DEPLETION and THEFT. When operation vanguard was constituted in this country, party executives within areas where galamsey was ongoing never organised any press conference to express their revulsion concerning the said joint military operation unlike the forestry task force.It tells you that, if the forestry task force had done their work in accordance with *common sense*,party executives within the eight constituencies wouldnt have organised a press conference.

Today as we speak, carpentry which was the profession of Jesus Christ father is now a crime under Mr Kwadwo Owusu Afriyie. The crime is owing to the fact that, their raw materials can only be gotten from the FOREST and if there is an ateempt to protect the forest,carpentry should be declared as an unlawful activity. The question we should be asking ourselves is that, when we declared war on galamsey, did we declare operations of goldsmith as an unlawful business in this country?. Mr Kwadwo Owusu Afriyie has forgotten that, even the forestry commission has a policy for timber firms where it is mandatory for these timber firms to keep 30% of their products as local sales so that, carpenters can go and buy and then use them to manufacture doors, desk,tables,window frames, caskets and others. Isnt it disheartening that, the task force who should have gone to the forest would all of a sudden decide to veer of and then enter the premises of these carpenters and subject them to all forms of inhumane treatment.

Under Mr Kwadwo Owusu Afriyie's leadership, forest service division in Sefwi Wiawso has been attached with a "COORDINATOR" and some one is in charge of that. The said person happens to be one failed parliamentary candidate of the New Patriotic party who contested the current Sefwi Wiawso MP at the primaries. I have done my checks on the very ACT of parliament that established the forestry commission in 1999 and surprisingly, there isnt any position called coordinator in the said Act [see Forestry Commission Act,1999( Act 571)]. So the question we need to ask is, where is the said coordinator deriving his powers from?. Again , this same coordinator and one Mr Charles Owusu led this joint military task force in the operation Halt activity to brutalise people suspected to be" political followers of the current Regional minister and are into carpentry business."

Because of an agenda to make the MP look unpopular in the eyes of the very people who overwhelmingly endorsed him in 2016 election, these military men were deployed at the blindside of the Western Regional Minister whose office was supposed to have been notified first. Every one knows that, the head of regional security happens to be the Regional minister. What is quite intriguing is that, the Regional minister wasnt even aware of this military operation in his region. Some of us were very happy when he directed the military men to leave his territory with a caution. Who in his reasonable mind would sanction a military operations without first informing the Regional minister? If this is not the highest form of uncivilized ineptitude and gross incompetence on the part of Mr Kwadwo Owusu Afriyie,then what else is it?.

As it stands now, twenty eight forest compartments have been issued to one messrs development company limited in breach of section 3, and section 9(1) of the Timber utilization management Act,1997( Act 547). What is more worrying is the fact that, the said concession is a forest reserve. One serious issue we need to consider is that, these timber firms have always been cutting down trees in the forest without replanting culminating into dangerous depletion of the forest to the extent that, the forestry commission has to spend billions of cedis to embark on this current AFFORESTATION programme currently ongoing. Moreover if we are serious about protecting the forest from wanton destruction, then the supervisory and "monitory " unit of the forestry commission ought to mount checks on the operations of these timber firms in the forest.

Trying to hide behind this exercise as a yardstick to frustrate ordinary carpenters in Western North Just to make the MP look unpopular is senseless so to speak. Because of this callous treatment meted out to our artisans, the party has suffered series of public backlash from the New Democratic Congress. It is a truism that,when you give your opponent the gun to fire you,definitely you must be prepared to look for a land for your burial. We have allowed the NDC to move from one radio station to the other with a message that, it is only under NPP government that, carpentry would be declared as an unlawful business meanwhile that isnt the case. Sir John's monumental incompetence has indeed caused the party this public disaffection. The prospects of the NPP in western north in the coming 2020 election is in danger.