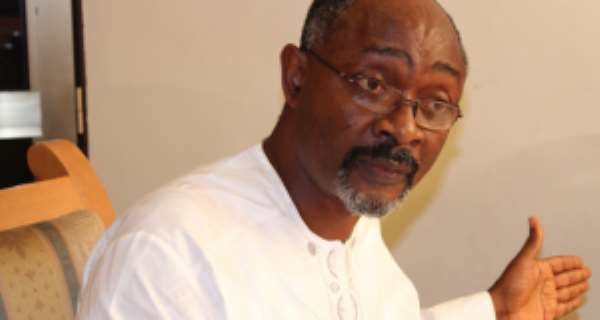 Businessman Alfred Agbesi Woyome, on Monday accused Deputy Attorney General, Godfred Dame of spewing lies, following the latter’s claim that he [Woyome], was seeking to collude with defunct UT Bank to hide some of his assets identified by the state.

Mr. Dame made this disclosure moments after the Supreme Court had adjourned the hearing of a case in which defunct UT Bank claimed to be the receiver of certain properties of Woyome that the state had identified in their attempt to retrieve the Ghc51 million judgement debt paid to him.

Confirming what was said earlier in the court on Monday, Mr. Dame on Eyewitness News said: “The state was able to discover about four properties in very prime areas owned by Alfred Woyome.”

Mr. Dame said there appears to be a case of collusion between UT Bank and Alfred Woyome to conceal some assets from the state.

Mr. Woyome, who requested to be given audience to respond to Mr. Dame, angrily denied the claims by the Deputy Minister, saying “This is purely propaganda by Godfred Dame. There has never been any collusion..He should stop the lies. Someone in the NPP government should talk to him. They should call Dame to order.”

I will face Dame in court
An emotionally charged Mr. Woyome, who would barely allow Umaru Sanda, the Host of Eyewitness News to ask any further questions, threatened to sue Mr. Dame for making such claims when a case was already ongoing in court.

“If Godfred Dame keeps doing what he’s doing, I’ll see him in court. If I lose the case, I’ll pay but if I win, the state would have to pay me.”

'We won't relent'
Meanwhile, Mr. Dame has said the state will not relent in its efforts to recover monies owed by Mr. Woyome.

“I made a point that the state will not relent in its effort to recover monies owed by Mr. Woyome. We are beginning to see the end of this matter,” Mr. Dame said on Eyewitness News.

Background
Mr. Woyome was paid GHc 51 million after he claimed that he helped Ghana to raise funds to construct stadia for purposes of hosting the 2008 African Cup of Nations.

The businessman sued the state for a breach of contract relating to the construction and was awarded the default judgement because the state did not put in a defence.

However, an Auditor General's report released in 2010 said the amount was paid illegally to the Mr.Woyome, who is a known National Democratic Congress financier.

He was subsequently arrested on February 3, 2011 after the Economic and Organised Crime Office (EOCO), which was commissioned by the late President John Atta Mills to investigate the matter, had cited him for wrongdoing.

Mr.Woyome was initially charged with conspiracy, defrauding by false pretence and corrupting a public officer.

He was later re-arraigned and charged with two counts of causing financial loss to the state and defrauding by false pretence.

On June 5, 2012 Mr.Woyome was discharged but re-arrested and charged with two counts of causing financial loss and defrauding by false pretence.

Justice Ajet-Nasam also said there were no contradictions to the documentation evidence on the agreement for compensation claimed by the accused person.

Pay back cash
But in 2014, the Supreme Court ordered Mr. Woyome to pay back the amount, after former Attorney General and now Special Prosecutor, Martin Amidu challenged the legality of the judgment debt paid the businessman.

But almost four years later, the amount is yet to be retrieved in full as the Akufo-Addo administration is currently examining the businessman in court.