Stop Abusing The Use Of Honorary Titles 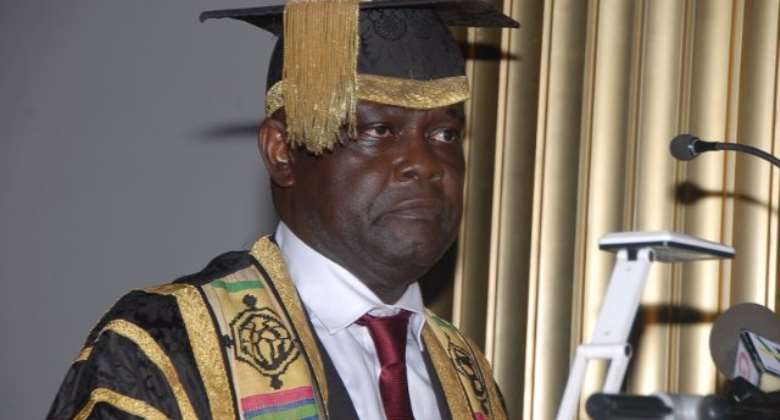 Professor Ebenezer Oduro Owusu, Vice Chancellor of the University of Ghana on Tuesday asked the public to stop using honourary titles and called on the National Accreditation Board (NAB) to be ruthless in applying the sanctions.

He said people pay money and are given honourary titles such as Professor and Doctor, among other degree titles, which they use to their advantage, he explained.

The Vice-Chancellor, who gave the caution during a courtesy call on the University in Accra by officials of the National Accreditation Board, said it cannot be looked unchecked.

He said they were not supposed to be pre-fixed when the users had not earned them, adding that, the masses had to be educated.

“When people had gone through pain, spent time and resources to earn such titles, others just give themselves titles to get fame and this shows how dishonest the society is”, Prof Owusu pointed out.

Prof Owusu said, this culture of dishonesty is even practiced by some religious leaders, politicians, those in the entertainment industry and others.

He blamed some journalists, who encouraged the practice and advised them to cross-check before publicising or acknowledging people with academic titles.

In reacting to the UG being unified, in terms of conditions of services and promotions, Prof Owusu called on the NAB to classify universities before they were ranked.

Dr Kingsley Nyarko, NAB Executive Secretary advised the UG to operate on the same platform as the other universities for fairness and a common system that distinguished tertiary institutions from the others.

He said the University of Ghana had processes that are different from other universities and it was high time it (the UG) came to a conclusion that would be acceptable by all, he said.

He said, since quality assurance was at the heart of accreditation, the NAB also would ensure that lectures were also qualified, to help produce quality students.

He was not happy how some teachers used fake credentials to get employed, adding that, measures should be put in place to flush out such teachers.

Dr Nyarko explained that NAB was mandated to accredit institutions and programmes to ensure maintenance and promotion of quality standards in tertiary education.

The principal vision of the NAB was Information Communication Technology (ICT) driven, which would lead to efficiency, minimise paper work and safe time, he noted.

Dr Nyarko asked tertiary institutions that were not qualified to desist from giving out titles to members of the public.

Mrs Colette Hukpati, Head of Department of the Accreditation Department, NAB, called on tertiary institutions not to accredit their schools alone but also their programmes, to ensure that their certificates was accepted, not only in Ghana, but in other international universities.