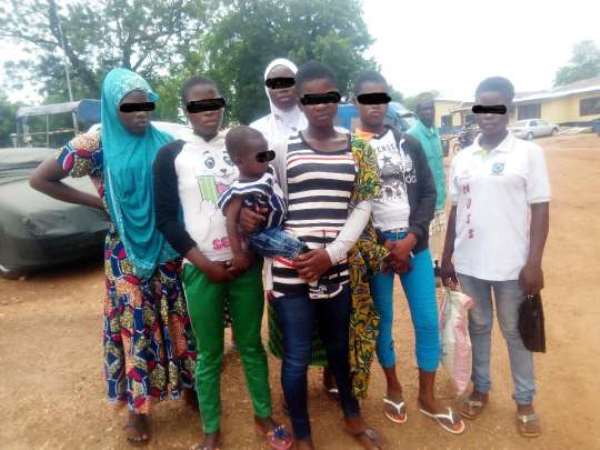 The Ghana Education Service (GES) in Wa East District has set free six pregnant teenage girls forced into marriage and handed them over to the Domestic Violence and Victim's Support Unit (DOVVSU) of the Ghana Police Service in Wa.

The victims, who were freed from their supposed husbands' homes after years of bondage in Sawuobe community, were aged between 15 and 19 years.

They were all pulled out from school and given out in marriage, a situation that angered education officials, who reported the matter to DOVVSU in the Upper West.

Mr Ernest Nwadei, the Wa East District Education Officer, told the Ghana News Agency that several girls in that community are in child and forced marriage slavery for over 20 years.

Parents of the community have been accused of intentionally pushing their young little girls into marriage at the time they are expected to be in school.

Education officials said the matter was reported to DOVVSU this week after detecting the phenomenon was escalating. DOVVSU then invited the supposed husbands and their parents but all refused to turn up, except two who surrounded to the police.

'Since we have school in 1986, no single girl has completed Junior High School because of teenage pregnancy and early forced marriage in the town,' said Nwadei.

He said many of the girls are forced to abandon school at the primary and JHS levels to marry with several of them giving birth to fatherless children because their husbands refuse to take responsibilities.

Pre-marital sex (teen sex) and teenage pregnancy, he noted, was on the ascendency in the town but no action has been taken by stakeholders including community leaders and the assembly.

'We are now hopeless and disgraced because education is the key to success and our children are interested in only marriages and teenage pregnancy which would not bring any good to the town,' Mr Nwadei said.

Some of the victims narrated their ordeal to GNA saying they have been 'deliberately and forced' by their parents and close relatives to drop from school and marry.

Ms Fusina (not real name) said: 'My biological brother repeatedly strikes me and beats me to marry, in one instance, I had one of my teeth broken as a result of the beatings when I refused to do so [marry the man]'.

The victims, many of whom proclaimed ambitious dreams, said they would be very happy if a second chance could be offered them to go back to school to continue their education.

Mr Asumah Marifa said some parents were not in support of the outmoded culture of child and forced marriage, and tried apportioning blame on the pregnant girls for not heeding parental advice.

'They [girls] have bad attitudes and often times reject advices from their parent and that is leading them into this unspeakable disgrace,' he said.

'We are worried about our children school dropout and we are putting possible measures to curb this predicament of ours,' he added: but we need helping hands especially from the Wa East District Assembly to help avert the problem'.