Funding Government Agencies: The Case for the NCCE 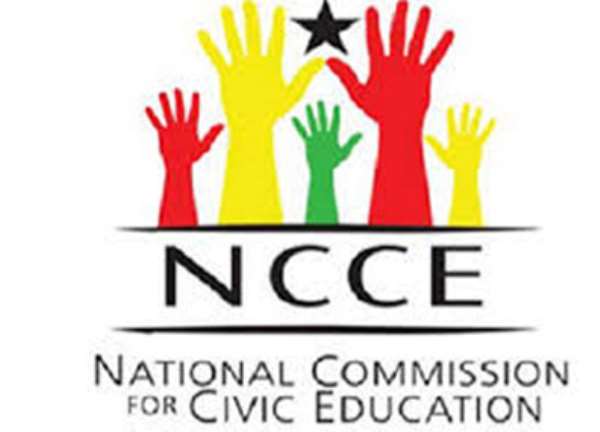 The National Commission for Civic Education was established by a parliamentary Act; Act 452, 1993 with the mandate to provide Civic education to all Ghanaians. The 1992 constitution of the republic dedicates an entire chapter to the educative body.

Chapter Nineteen Article 233 of the constitution provides the mandate of the agency which includes;

(a)To create and sustain within the society the awareness of the principles and objectives of this Constitution as the fundamental law of the people of Ghana;

(b) To educate and encourage the public to defend this Constitution at all times, against all forms of abuse and violation;

(c) To formulate for the consideration of Government, from time to time, programmes at the national, regional and district levels aimed at realizing the objectives of this Constitution;

(d) To formulate, implement and oversee programmes intended to inculcate in the citizens of Ghana awareness of their civic responsibilities and an appreciation of their rights and obligations as free people; and

(e) such other functions as Parliament may prescribe.

Over the years the NCCE has under difficult circumstances performed their mandate per the dictatorship of Act 452, some which include being instrumental in the strengthening and deepening of democracy in Ghana; educating the Ghanaian populace to participate in seven successive elections in the fourth Republic.

The NCCE has played and continues to play key roles in social and political development by providing the vital awareness and sensitization which has encouraged many citizens to exercise other civic rights and responsibilities. These areas include, Citizens’ participation in community and local development, Women’s empowerment to participate in political development, promotion and protection of the rights of children, the vulnerable and the excluded in society, Peace and Conflict Resolution Measures and Revenue mobilization. The commission has over the years formed NCCE clubs at all levels of our educational system; Primary, Junior and Senior high schools, Vocational and Technical Schools and Tertiary Institution. The Commission organizes constitutional and civic knowledge quizzes, debates and games in these schools.

The contribution of the NCCE to the democracy and development of the country cannot be over looked; the numerous challenges that Ghana faces today including tribal and land disputes, drug abuse, Illegal mining, high rise in armed robbery, child labour, poor sanitation, road accidents, human rights abuse et al can be minimized drastically if the functions of the commission for civic education are efficiently and effectively rolled out.

Per Article 239 of the constitution the institution is to be funded from governments’ consolidated fund, but the question I ask is, is the NCCE properly and adequately financed by government? The answer to this question I presume is not in the public domain but the case of the Accra Metropolitan NCCE office presents to the Ghanaian public the real image of the constitutional mandated body.

The Accra Metropolitan office of the NCCE is in charge of Six constituencies within the Greater Accra Region which includes Ablekuma Central, Ayawaso Central, Ashiedu Keteke, Okaikoi South, Osu Klottey and Ablekumah South, with its main office located at the center of the national capital in an old building in the same compound with the Accra Digital Center right opposite the “Awudome” cemetery.

The office as at the beginning of the month of September had one functional computer and a printer, one official vehicle with no motorbike to liaison with its sub-metro offices or performs any other function. I chanced on some members of staff trekking around the city of Accra to distribute letters to some selected companies located far apart each other. These employees were to present proposals to the companies for support in providing them with new or old computers to help execute a constitutional mandatory function as a government institution.

To the institution this act is not new; the only functional computer in the office was sponsored by the European Union. The office lacks basic tools for advocacy including public address systems, Cameras, Printers and internet service.

The story will not be different if you visit any Metropolitan, Municipal or District Assembly around your vicinity, even the National Head Office has challenges when it comes to resourcing projects, it currently shares office space with the Electoral Commission.

The very function of the commission has either a direct or indirect benefit to almost all public and private agencies in the country, yet it is left to rot due to the lack of resources and logistics needed to execute its well formulated projects. The quarterly program for the commission contain some policies for the month of September including Public education on the linkage between corruption and the fundamental human rights and freedom, conduct programmes on the duties of a citizens, educate the public on the judiciary and the protection of human right and sensitise the public on environmental protection among others.

Why should an organisation that advocates for citizens to pay taxes lack government support?

Why should an organization that creates a peaceful environment for both private and public sectors to undertake their businesses lack?

Why should an organization that proclaims the need for patriotism be neglected and stereotyped against by the very public it selflessly serve?

A popular adage that still holds water over the centuries is, “Prevention is better than cure”. Over the years successive governments have implemented policies and even created ministries to help curb various social problems that occurs as a result of the deeds and misdeeds of the citizenry, in areas such as Sanitation, domestic abuse, crime rates, drug abuse, health related problems, illegal mining (Galamsay), teenage pregnancies, early marriages, conflict etc. Most policies instituted to control these social uncertainties are heavily financed only when the menace has emerged and is nearly out of control. Why wait for what can be prevented to reach a stage that will require double or more cost.

The court of public opinion adds salt to the injury by stereotyping every government organization as ineffective and corrupt without any knowledge of what transpires in these organisations. Our citizenry has adopted the culture of the sadist, looking out for faults to blame and not to praise when all is well.

We are quick to point out faults and call names without offering any specific solutions to undo the wrong done or do the right. Only vague suggestions flood both our main stream and social media platforms, with citizens reading meanings into every national issue with their eyes bled with partisan political colours; the more reason the commission should be well funded to educate.

“The Ghanaian Attitude” is what most people refer to as the source of our woes as a country. What else but civic education can change the mindset of Ghanaians toward each other, self, leadership, governance, politics, responsibilities, ethnicity, religion and gender?

Over the years various institutions, individuals and bodies who have a sense of the importance of the NCCE have supported its projects and collaborated with them in achieving the vision of being an effective independence government institution delivering civic education to all Ghanaians and working towards sustaining Ghana’s Democracy.

The government has not entirely abandoned the institution but much support needs to be channeled to the commission for proper performance and accountability. Civic education will not just save the present Ghana but also the Ghana yet to be experienced by the next generations.

Private organisations and corporate bodies have also helped in the past but more needs to be done, for the plight of the commission is as big as the biblical presentation of the ark of Noah. More sponsorships and partnerships from private organisations of all sectors; Educational, Banking, Industry, Entertainment, Sports, among others.

Another sector that is hugely benefiting from the services of the National Commission for Civic Education is the Media; yet, it provides much space for politicians within its media space and sadly does not give room for relevant societal and constitutional institutions such as the NCCE, the oxygen of publicity. The media should not just be a means of profit making and spearheading political agendas but also a tool to transform our beloved nation positively.

The media is always the first to cry out loud during “man-made disasters” calling on government agencies and politicians to respond, a lucid example is the June 3rd “circle twin disaster” caused predominately by flooding powered by indiscriminate disposal of refuse. How many media houses have engaged the relevant authorities, not politicians on these issues prior to the disaster that claimed lives? Yes, I am not blind to the efforts by some media houses to advocate on relevant matters pertaining to our country. Some which include; road safety campaigns, sanitation campaigns and the popular “Stop Galamsay Now “.

Private individuals can also provide the commission with all forms of positive support to help sustain our democracy and peaceful coexistence as a country, constructive criticism will help mold and build our government institutions, vague public outcry will not right the wrong. Every citizen must feel responsible for our woes as a country and marshal him or herself to change the narrative of our dear nation.

For a Ghana of opportunities and prosperity we must rekindle the spirit of a being a “brother’s keeper”, adopt the principles of “each one teach one”, and return to our African roots armoring ourselves with the spirit of “UBUNTU- I am Because We Are”.

More Opinion
Modern Ghana Links
The Sources Of Funds Of Elected Politicians: The Shroud Of Democracy
After Buganda Showing Yellow Card to NRM; What Next?
2020 Samampiid, A Viewpoint Of An Indigene.
Nana Akufo-Addo, A Man Of Vision & Perseverance; He Must Be Studied In Our Schools
Govt’s delay in the distribution of PPES unacceptable; Pupils must be given critical attention
A clarion call to young comrades in the struggle
The 8th Parliament – True test of Ghana’s democracy
Open letter to the NPP Upper West Regional Chairman: Voice of the silent majority in upper west NPP politics
Consensus-building is a national duty imposed on both the NPP and the NDC per the outcome of the 2020 elections
Election Reports Quotes Dossiers
TOP STORIES