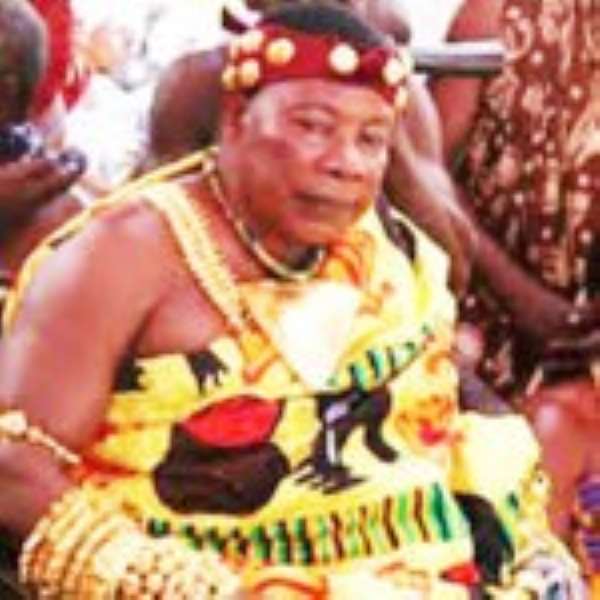 The Special Prosecutor, Mr. Martin A. B. Amidu, has declined to investigate allegations leveled against the Offinsomanhene, Nana Wiafe Akenten III, by one Kofi Appau, who claims to be a Spokesman of the Concerned Youth of Offinso in the Ashanti Region.

Kofi Appau has petitioned the Office of the Special Prosecutor to probe an alleged embezzlement of GH¢180,000.

The sole petitioner alleged that Nana Wiafe Akenten III had misappropriated and not accounted for over GH¢2,300,000 paid by the Ministry of Health for a building owned by the Traditional Council, and another payment made by the Ghana Water Company Limited (GWCL) to the Offinso State for the construction of the Barekese Dam.

The first amount of GH¢1,850,000 was paid to the Offinso Traditional Council by the Ministry of Health to take over the camp building left behind by the management of MFS Contractors, which constructed the Kumasi-Techiman road at Nkenkasu in Offinso North District, and which now serves as the National Ambulance Training Center.

The payments were said to have been made in two installments of GH¢1,000,000 supposed to go to the Traditional Council but credited to the personal Barclays Bank account of Nana Wiafe Akenten III on September 7, 2011, from a Ghana Commercial Bank cheque issued by the Ministry of Health.

The Ministry of Health issued another Ghana Commercial Bank cheque of GH¢850,000 on October 19, 2011, for the final installment, which the Offinsohene, once again, credited to his personal Barclays Bank account, instead of that of the Offinso Traditional Council, making it a total of GH¢1,850,000 million.

The Offinsohene was also alleged to have received GH¢450,000 from the Ghana Water Company Limited (GWCL) on behalf of the Offinso Traditional Council.

On November 22, 2005, the Governing Board, at its 212th Regular Meeting, approved a total sum of about GH¢7.821,234 as part of GH¢43 million as compensation to communities affected by the construction of the Barekese Dam in the Ashanti Region, which included Anwoma, Nkonsuotuano Sosamo, Asokore, Atene Akotene, Nkwantakese, Maban, Tonto Kotoben, Anyinase, and Offinso.

But the Special Prosecutor has declined to probe the Offinsohene on the grounds that his outfit “deals purely with corruption and corruption-related transactions or offences.”

In a terse response dated May 28, 2018, with reference No. OSP/SCR/2/11/18, which was dispatched to the petitioner on May 29, 2018, Mr. Amidu advised the petitioner to redirect his complaint to the appropriate authority, suggesting the Economic and Organised Crime Office (EOCO).

Meanwhile, discreet investigations by The Chronicle have revealed that the Nkenkasu facility being referred to by Kofi Appau is the property of Nana Wiafe Akenten III as a person, and that proceeds accruing from the said facility are exclusively for his (Nana Wiafe Akenten's) benefit.

In correspondence dated May 27, 20124, MSF Construction handed over the Nkenkensu Campsite to Nana Wiafe Akenten III in appreciation of his support to the construction of the Kumasi Techiman Highway Phase II project.

Mr. Armando Filipe, Contracts Manager, stated that on winning the contract in 2007 to construct the said road, the Offinsohene, on approach for a temporary site, gave them a suitable site and assisted them to build the camp, and that upon the successful completion of the project, the company gifted “the camp, as well as all the developments on it, for your personal use,” in appreciation of his support, thus, indicating that the property belonged to the Omanhene and not the Offinso Traditional Council.

Speaking on the allegations, Nana Wiafe Akenten, who is anxiously waiting for a report of EOCO, following a probe of the allegations, said he had paid GH¢900,000 to the Odikro of Ayensua for the benefit of the communities in the Barekese catchment area.

He also announced that GH¢900,000 was paid to the Member of Parliament (MP) for Offinso North as his personal contribution towards projects, including dormitories, for the Nkenkensu and Akomadan Senior High schools, because the monies accruing him from having rented it out to the National Ambulance Service to serve as Training Center, emanated from the facility in the area.

The Registrar of the Traditional Council also disclosed at the meeting that the Offinsohene had facilitated the expenditure of GH¢60,000 on scholarships to about 21 students over the past two years.

The meeting also confirmed that for the past 25 years the Omanhene had not levied any chief or subject in the traditional towards the numerous projects and programmes the OTC had embarked upon, and condemned attempts by some unscrupulous and faceless elements riding on the back of a so-called Concerned Youth to tarnish the image of the Offinsohene and the OTC.