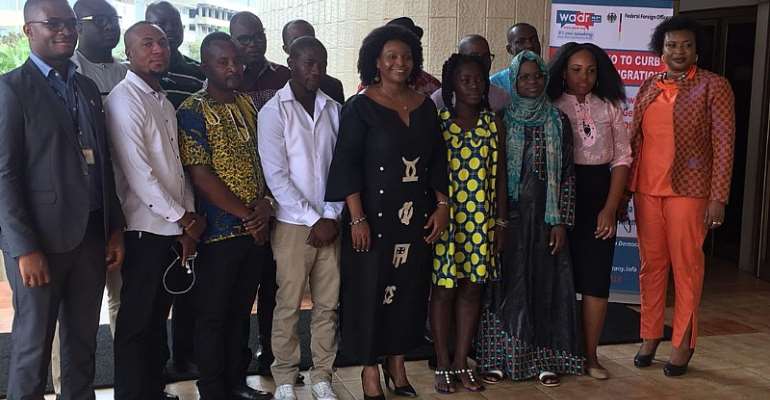 The West Africa Democracy Radio (WADR), a renowned community radio station based in Dakar, Senegal, has organized a training programme for some radio journalists in Ghana.

Starting on Monday, September 24, 2018, and ending on Tuesday, September 25, in Accra, the training brought together about twelve (12) radio journalists working with community radio stations.

In an address, the Station Manager of WADR, Agnes Thomasi, said the training had become necessary due to increased reports of youth in West Africa trooping Europe through irregular migration.

Given this background, the WADR enrolled the Curbing Irregular Migration in West Africa project, with the target countries being Ghana, The Gambia, Mali, and Niger, Ms. Thomasi revealed.

She added that under the project, the WADR will build the capacities of journalists and orient station managers in the various partner radio stations in the target countries.

This project, Ms Thomasi stated, was being funded by the German Embassy in Dakar.

She noted that irregular migration to Europe has and continue to bring untold negative consequences to the individuals, their communities and countries at large, and this has become a matter of serious concern in the sub-region.

She disclosed that in all, 40 journalists – 11 in Ghana, 10 in Mali, 11 in The Gambia, six in Niger and 2 from WADR – were being trained on the techniques to curb irregular migration.

Recounting some of the achievement of WADR in West Africa, Ms. Agnes Thomasi said WADR could boast of being the only media which reported in details the outbreak of Ebola in some West African countries few years ago.

According to her, WADR, established in 2005, paid and trained journalists to go into the field, interact with Ebola patients, and to inform the world through broadcasting findings.

“We took the risk, went without insurance to speak to the Ebola patients, and then spread the message across the world,” Ms. Agnes Thomasi said.

She added that WADR had also championed other matters including exclusive election coverage in West Africa, citing the Gambia and Senegal as examples.

She also said WADR had worked with the Open Society Initiative of West Africa (OSIWA), Plan International, Water Aid, and others, on various developmental issues in West Africa.

The WADR Station Manager was hopeful that the two-day training programme would achieve the expectation of getting the participating journalists better equipped to help fight irregular migration in West Africa with their reportages.

In a remark, the Executive Director of the West Africa Civil Society Initiative (WACSI), Nana Asantewaa Afadzinu, reiterated the need for such a training programme.

She noted that the media played a crucial role in informing people, however, often, there are misinformation.

Nana stated that the media has usually been silent on the ills suffered by people who embarked on irregular migration to Europe, and rather trumpet the so-called greener pastures they go to seek.

This, she stated, must be curbed, adding that professional radio reporting plays a vital role in this fight.

These causes, she believed, radio journalists could tackle to bring a better life to the youth in the country.

“How do we use radio to ensure that the life people live here is ok, so that they would not endanger their lives to travel on sea, desert, and other risky routes to go seek greener pastures?” the WASCI Executive Director queried.

She further encouraged the participating journalists to ensure that they reap the full benefits of the training to enhance their professionalism in curbing irregular migration.