‘Let’s Work Together For Ghanaians’ 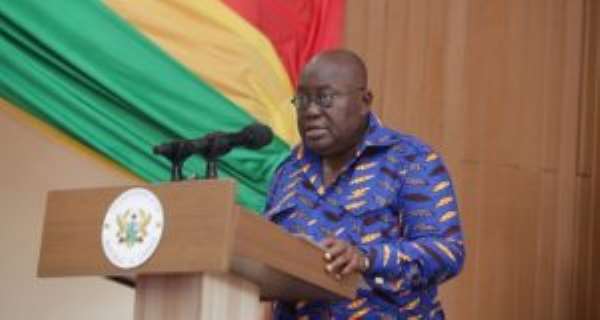 President Akufo Addo has called for more collaborations between government and traditional authorities to improve the living standard of Ghanaians.

The President says traditional leaders are in a better position to advice government on projects and interventions needed in particular communities.

Speaking at a meeting with members of the National House of Chiefs at the Jubilee House, President Akufo Addo said traditional authorities have a role a play in the country's development.

“Lets always find a way of working together, I think that our attitude alone inure to the benefit of our population, and from our different angles, as the elected representatives of the republic, traditional authorities are also equally concerned about the welfare of our people so the two of us from our different angles we make in my view a natural alliance, and I am very determined to make sure that alliance works to everybody's benefit ” The President said.

The President also explained that he will work to ensure that there is a strong alliance between the Presidency and traditional rulers for the benefit of all Ghanaians.

Speaking at the inauguration ceremony, President Akufo-Addo noted that despite the significant spread of telecommunication services across the country, the distribution of necessary telephony infrastructure is still very much concentrated in the major economic centers of the country.

He explained that the government continues to attach great importance to ensuring that telecommunication and ICT facilities, which can now be described as necessities of life, are available in all parts of the country.

Gov’t set up award scheme for Chiefs who fight ‘galamsey’

Government is working out an awards scheme to reward chiefs and other traditional leaders who will make strenuous efforts to prevent or reduce illegal mining activities in their traditional areas.

Mr. Kofi Dzamesi, Minister for Chieftaincy and Religious Affairs, who made this known in July this year, said the presidential awards' scheme would honor chiefs, queens, and other traditional leaders as well as communities, who would sustain the fight against galamsey in their areas.

Speaking at a meeting of the National House of Chiefs (NHC) in Kumasi, he said the fight against galamsey could not be won without the active involvement and participation of chiefs.

He urged chiefs to support the efforts of the government to stop the destruction of the country's water bodies and other natural resources.