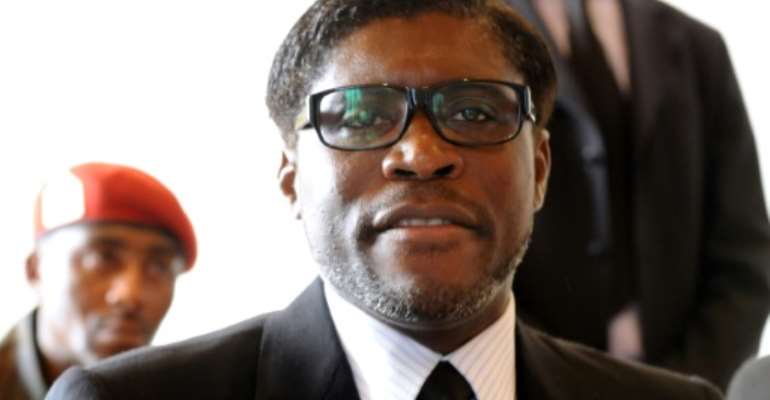 Teodorin Nguema Obiang, seen in 2012, is Equatorial Guinea's vice president and son of the president. By ABDELHAK SENNA (AFP/File)

The tiny West African state of Equatorial Guinea on Tuesday demanded Brazil hand back more than $16 million in cash and luxury watches that border officials confiscated from a delegation accompanying the president's son.

Teodorin Nguema Obiang, vice president of Equatorial Guinea and son of its longtime ruler, President Teodoro Obiang Nguema, arrived Friday on a private plane at Viracapos airport near Sao Paulo as part of an 11-person delegation.

Federal police found $1.5 million (1.28 million euros) in cash in one bag and watches worth an estimated $15 million in another, O Estado de Sao Paulo reported.

Brazilian law prohibits people from entering the country with more than 10,000 reais, or about $2,400, in cash.

"The vice president was on a private trip to Brazil," the Brazilian ambassador to Equatorial Guinea, Evalde Freire, who was called in to the foreign ministry in Malago, told TVGE on Monday.

"All international travellers are subjected to national airport procedures, where customs and police do their job," Freire said.

O Estado de Sao Paulo quoted a diplomatic source from Equatorial Guinea as saying the money was to pay for medical treatment Obiang was to undergo in Sao Paulo.

The watches were for his "personal use" and engraved with his initials, the report said.

Obiang junior, 49, was sentenced in France to a three-year suspended term in October 2017 for money-laundering.

He has visited Brazil several times, attending the 2015 Carnival in Rio de Janeiro when a samba school won top honours for a Equatorial Guinea-themed parade but was heavily criticised because its was allegedly funded by the Obiang regime.

Obiang senior, 76, seized power by ousting his own uncle, the first post-independence president Francisco Macias Nguema, who was then shot by firing squad.

He won a fifth seven-year term in 2016 with nearly 94 percent of the ballot. General elections last November saw his party win 92 percent of the vote. Both elections have been criticised as fraudulent.

Critics accuse him of brutal repression of opponents as well as election fraud and corruption.

Equatorial Guinea has become one of sub-Saharan Africa's biggest oil producers, but a large proportion of its 1.2 million population lives in poverty.