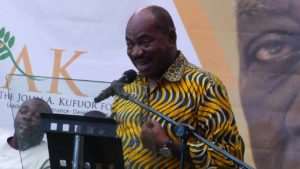 Chief Executive Officer of Kumasi Asante Kotoko George Amoako says his outfit can avoid friendlies with arch-rivals Hearts of Oak and will not be affected in any way.

Some sections of Hearts of Oak fans have called on management of the club not to play in any unofficial game with the Kumasi based club.

This follows a sequence of events after the Porcupine Warriors beat Hearts back to back in a two-legged friendly games in Kumasi.

Seven Accra Hearts of Oak fans were apprehended for destroying properties at the Baba Yara stadium which to the dismay of some fans are calling for the Phobians to not engage their rivals in friendly games.

However, the new Chief Executive Officer of Kotoko - Mr George Amoako - has responded to these unofficial statements that the Porcupine Warriors can make do without Hearts of Oak friendly exhibitions.

'I have heard that Hearts of Oak are saying they won't play us again for friendlies. That's fine but we can make do without them (Hearts of Oak) if they say they won't play us anymore in friendly games. Who needs who the most now? It is them. In any way, there are the likes of Ashantigold, Medeama, Karela, Aduana and we can be playing against these sides.' Amoako told Sikka FM.

Following the 2-0 defeat to Kotoko, the fans of Hearts started the campaign for "No Kotoko friendlies", with some of the supporters leaders at the fore of the protest.

'We don't want any more friendlies against Kotoko. We have told our management to reconsider that and we mean it' Supporters spokesperson Paa Kofi Sunsum said after the Super Clash.

'This is not because we fear them but we feel things have gone beyond the rivalry boundary between us. The referees continue to cheat us when we play such games in Kumasi' Sunsum added.

Also one of the staunch Hearts of Oak supporters in the Ashanti region - Abbas - echoed Sunsum's stance.

'Most of the times that hey, Kotoko fans, misbehave they are are not caught but look at what is happening now. Our supporters were arrested and molested by the security. Enough is enough now.' Abbas said.