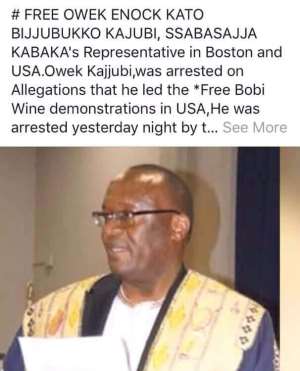 Friends,
I’ve read Bobi Wine’s statement on how he was tortured by SFC soldiers, and it’s really sad. Torturing MPs marks a new low for Museveni , because Just having him as our life president is enough torture for Ugandans. I’ve heard some NRMs criticise Bobi saying that he didn’t have any visible wounds or scratches in the face, and therefore he wasn’t tortured, but I think they are just clueless about what torture means.

‘’Torture is any act by which severe pain, whether physical or psychological, is intentionally inflicted on a person as a means of intimidation, deterrence, revenge, punishment, sadism, or information gathering.’’ Your torturer will only be satisfied when you tell him whatever he wants to hear (whether or not it’s true). And you tell him that lie, and you know it's a lie, but it stops the torture. Seriously, what is so difficult about continuing to abide by the Geneva Convention?

Watching a show called "After Hitler", it makes one think a lot of what might happen after Museveni in Uganda, if we aren’t careful. The allies and the Jews took revenge for years to punish the German civilians for the Nazis. I, therefore, urge all members of Parliament to hold the soldiers that killed Yasin Kawuma(Bobi's driver, and tortured MPs accountable for their actions, despite the fact that the president may be trying to protect them. Our nation is at dangerous point with a pathological liar in highest office in our world. We need to find a peaceful and acceptable way out of what happened in Arua instead of having govt officials continuing to make irresponsible statements.

Secondly, I have a lot of respect for Hon. Ruth Nankabirwa, but I feel her statement going around on social media, reportedly threatening to arrest Ugandans abroad who express negative opinions against the government, was irresponsible and uncalled for. The statement is obviously meant to suppress the truth, to instigate and silence people, to intimidate innocent people for control, and this is very unacceptable. Here’s the bad news:we will continue doing what we have been doing, because it’s our right to do so. It’s this culture of intimidation and enmity, as against accommodation and respect for a critic, which is making majority of Ugandans to hate NRM. Bosconians (my preferred term) have this odd notion that, no matter what evil they commit (or, more likely, get others to commit for them); we should "respect" them, that no matter how moronic their policies, we should pretend not to notice how stupid they are.

I'm sick of pretending that Uganda is one big happy family, and I refuse to euphemize moronic evil.Yes, treating critics as enemies is not a new phenomenon under NRM, but it’s getting worse. Now the common people have started paying in the same coin and the intellectuals plus Diasporas are at the receiving end. Fact is we are going down a spiral of IRREVERSIBLE doom. The gentleman from Boston,USA, who was arrested recently should be released such that he goes back to his family. Please don't discourage Ugandans from visiting home again. Its just common sense stuff!