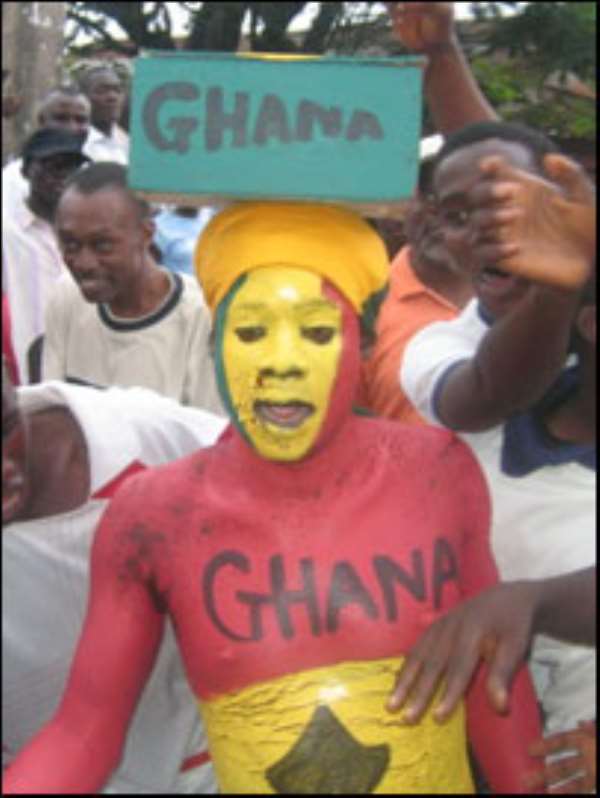 Accra, Oct 8, GNA - There was wild jubilation amid singing and dancing in the business centre of the Accra metropolis with a cool and serene weather to herald the Black Stars victory and qualification to the World Cup for the first time in the country's soccer history. After the Black Stars had gone ahead to score to convincing goals in the first half most of the supporters decided to embark on victory laps around the Tema and Ho stations, along the Makola streets and the High Street amid singing of praises for the gallantry of players and technical team for ensuring total victory for the country's qualification.

Ghana football has come a long and tedious way since the country started with the World Cup qualifiers but this round the Stars have made a consistent progressing into her qualification starting with the time the team managed a sweet victory over South Africa and followed it up with victories over Burkina Faso and Uganda.

The sweet 4-- 0 drubbing of the Cape Verde team in Praia is not only a sweet icing for the efforts of the Ghanaians but a reminder to all that the Black Stars have come of age and risen to where there should belong since they have conquered the rest of Africa but always failed to progress to World Cup.

Along the beaches, holiday-makers also joined in the euphoria of jubilation with all manner of dances while taxi and trotro drivers with flying and waving Ghanaian flags sing praises to the Almighty God for ensuring that Ghana qualifies this round to the World Cup. Some supporters also welcomed the news that out of the five slots for the African continent, three teams, Ghana,Cote d'Ivoire and Togo have qualified for the ultimate World Cup fiesta come next year in germany.

In the 'Garden City' of Ashanti Region, there was not much enthusiasm jubilation after Ghana's Black Stars beat Cape Verde by four goals to nil to qualify for the World Cup.

At the end of the match, most of the spectators who thronged the various shops at Adum, the commercial centre of Kumasi remained glued to their TV sets to watch the jubilation whilst discussing the results of the other matches concerning the World Cup.

Some of them were happy that Ghana had qualified with other West African countries while others expressed regret that countries like Cameroon and Nigeria failed to make it.

There was however jubilation in other areas of the Metropolis as Taxi drivers and cyclists tooted their horns while other young men jumped and hugged to congratulate each other for Ghana's qualification. Some of the people the GNA Sports spoke to said they were happy that Ghana now eventually for the first time qualified to participate in the World Cup. Koforidua At the New Juaben Municipal capital of Koforidua the township was thrown into a state of ecstasy following the Black Stars victory over the Cape Verde Islands despite a heavy downpour during and after the match.

Most of the drinking spots the GNA Sports visited minutes after the game were full of football fans who were clad in either the Ghanaians flag or white calico to celebrate the nation's historic qualification to the 2006 World Cup in Germany.

Some of the jubilant supporters whom the GNA talked to said even though the game was not that keen, the Ghanaian team had proved that they had the strategy to meet any team that came their way. A student of the All Nations University College, Charles Owusu like most residents in the municipality said they had no doubt that the Ghanaian team would make history for the country by winning the 2006 world cup in their maiden appearance.

Mad. Elizabeth Ntoso, a teacher/foodball referee, commended the Black Stars and said the nation expected nothing more than the World Cup in their maiden appearance at the tournament.

Mrs Veronica Aboagye-Brentuo, urged the government to deliver on its promise to the players to enable them make more history for the nation at the tournament.

Ms Theresa Bodua, a hairdresse r and Mrs Joyce Adu-Agyeman a rice seller also called for more donations to motivate the players for their novel achievement.