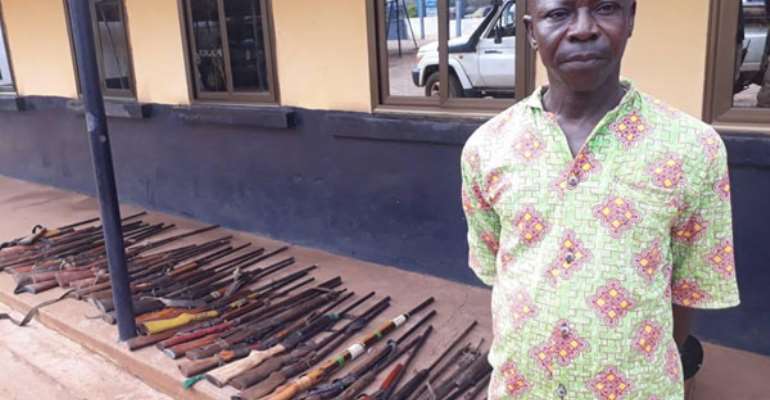 Daryenkye at the Wa Police Station

The Upper West Regional Police Command is investigating circumstances under which a manufacturer of firearms was arrested with police and military guns.

The police are eager to find out how one Daryenkye, the accused person, got guns meant for security officers in the Upper West Region.

He was remanded into custody by the Wa Circuit Court to reappear on 15th September, 2018.

His alleged accomplices Nyame Purokiamah and Michael Sonkora are also in police custody assisting in investigations.

It's believed that Daryenkye supplies firearms to armed robbers and other criminals in the region and beyond to perpetrate crime.

According to reports, the police seized some firearms from one Nyame Purokiamah ,61, at Loho Barrier in the Wa Municipality.

Upon interrogations he told the police that his grandson Michael Sonkora, 32, gave them to him.

Nyame Purokiamah and his grandson led the police to the hideout of Daryenkye, who was subsequently arrested.

The Deputy Upper West Regional Police Commander ACP Peter Ndekugri told DAILY GUIDE that the police would conduct further investigations to arrest clients of the suspect and retrieve all the firearms.

He, however, stated that the accused has licence to repair guns but not manufacture them.

“Due to the rampant robberies in the region I would plead with the court to revoke the licence of the suspect. If we ask him to continue to repair guns, we can't be sure that he would not continue to manufacture guns,” he said.

ACP Peter Ndekugri warned residents, who are in possession of illegal weapons, to voluntarily surrender them, adding that those found culpable would be prosecuted.