Burns Awareness: Our Attitude Towards Burn Injury, The Impact Of Burn Injury We Downplay 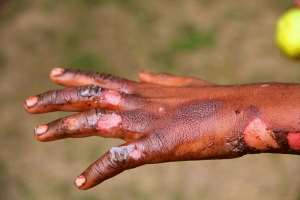 “Fire is a good servant but a bad master”. Many are those who have used this adage but have only experienced fire as a good servant. There is also quite a number though less than the first group of people who have experienced how bad a master fire can be as victims of burns. Some of these burns victims did not experience burns as a result of direct fire but as a result of an encounter with the other accomplices of fire in causing burns such as hot liquids (made hot by fire), electricity, radiation and chemicals such as acid. However because most of us are lucky and have only experienced fire as a good servant we always downplay the effects of burn injury and see it as a wound that will heal with time if only it does not kill you instantly as we witnessed some few years ago in this country. There are others who also have the perception that if your navel is not involved you will survive. Unfortunately these thoughts and beliefs are on the same scale as me telling you that when you mix gari, sugar, sand and water it will explode; they are all fallacies.

Burn injuries cause a lot of damage to victims and some of these effects stay with them for life. Take a father who is the breadwinner of his family who gets a burn injury from an explosion from a fuel tanker and the burns cover his face, chest and arms; severe pain is only one of his worries. He will be hospitalized for a long period ranging from weeks to months depending on the severity of his burn injury. During this period, he will not be able to work and that means his family is going to go through difficult times not because they have to get money only for their upkeep but also to pay for his treatment which can be very expensive due to the long period of hospital stay and the high cost of treatment. Since they want him to survive they would have to find ways of getting this money rather than leaving him at home which is not an advisable option. If he survives (which in some cases does not happen irrespective of the efforts put in) he may have to deal with disfigurement and not being able to work as he used to (depending on the extent of injury). If unfortunately he does not survive, the grief that the family goes through, coupled with the burden of losing a breadwinner is not one any of us would want to go through.

Imagine a scenario where a child whose parent takes his or her attention from him for a minute and this child falls into a pot of hot soup or water. This child and his parents would spend a lot of time at the hospital seeking treatment. This means that the father if he decides to stay with his child in the hospital would be taken away from his work and that is going to affect his income and by extension his family. If the mother decides to stay, and they happen to have other children, this means that the care of these other children will fall on other relatives who may or may not show them the care that they actually need. The mother would also lose working hours and money, money which they so desperately need to pay for treatment and to cater for themselves. The child on the other hand would grow seeing himself as different from other children due to the scars he may sustain and may have some physical limitations if the injury is severe enough to warrant it.

You imagined, but these are real life events that some people have actually experienced and these are just a few of the circumstances that some people find themselves in. There are others who are still experiencing such unfortunate situations on a daily basis all because they are victims of burns. It is in this light that the Burns Unit of the Komfo Anokye Teaching Hospital has taken it up to create awareness that burn injuries deserve more attention, public education and commitment than it is receiving now. Now that you have been made aware of how debilitating burns can be, the next time someone tries to feed you a lie about how burns is not so serious a condition, give him the look you would give me if I were to tell you that I was the guy who slapped Jesus on the day of his crucifixion. We must all make it an effort not to downplay burns but rather do our best not to fall victim (prevention and first aid to be discussed in later article). To those who are capable of supporting such victims who have gone through and are still going through difficulty due to burns, do not hesitate in giving your support.