Zimbabwe edges back onto tourist map

By Auntony ZINYANGE in Victora Falls and Susan NJANJI in Harare 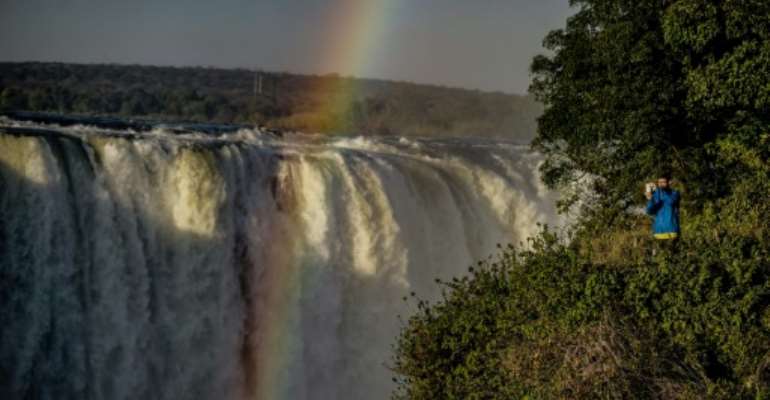 A tourist takes a photograph of the rainbow over Victoria Falls in Zimbabwe, where the number of tourists jumped by nearly 50 percent in the first quarter of tis year. By Zinyange AUNTONY (AFP)

After nearly two decades in the doldrums, Zimbabwe's tourism sector is enjoying a rebound, with visitors returning in droves to see the majestic Victoria Falls and explore unspoilt safari reserves.

The number of foreign visitors to Victoria Falls, the southern African country's flagship destination, jumped nearly 50 percent in the first quarter of this year compared with the same period in 2017, the tourism minister says.

Countrywide, arrivals rose by 15 percent to 554,417, according to treasury statistics.

Political and economic turmoil under longtime autocratic ruler Robert Mugabe had wrecked the sector, but authorities and tourism operators now believe the industry has a new lease of life.

Mugabe was ousted in November after a 37-year repressive rule during which tourists shunned the country, fearful of police demanding bribes, crumbling infrastructure and scarce fuel.

Cash was also in short supply from 2009, when hyperinflation forced Zimbabwe to abandon its own currency in favour of the US dollar.

"We were in a closed period for a long time," admitted Tourism Minister Priscah Mupfumira, speaking ahead of key elections on July 30. "We closed ourselves in, doors were locked."

Since Emmerson Mnangagwa took over as president from Mugabe in a de facto coup last year, "we are poised for growth," the minister told AFP.

"There are good vibes from the industry and from the international world --- everybody is so positive," she said. 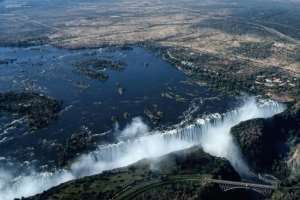 An aerial view of the Victoria Falls on the Zambezi River at the border between Zambia and Zimbabwe. Tourism accounts for around 10 percent of Zimbabwe's GDP.. By Zinyange AUNTONY (AFP)

With Zimbabwe's economy still in tatters, an influx of tourists is expected to help bring in desperately needed revenue, with the sector already contributing around 10 percent to GDP.

"It's a key pillar to our economy and a low-hanging fruit -- we just have to get our act together," Mupfumira said.

"It is not a cheap holiday," said Ilan Wiesenbacher, a restaurateur in Victoria Falls, where the Zambezi River plunges over a gorge and raises a mist that can be seen more than 20 kilometres (12 miles) away.

"We have seen a steady rise in numbers," said Wiesenbacher, manager at the Three Monkeys restaurant. "There is a general good feeling around Zimbabwe and tourism."

Even in the traditional low season from January to March, craft beer brewer Jake Le Breton had more glasses to fill at his River Brewing Company bar in Victoria Falls.

"We have just come out of a quiet season... (but) it was a busy time with a higher number of tourists than we have seen in previous years," said Le Breton, adding that local hotels have been fully booked.

"The general sense in this country, especially from a tourist, is one of anticipation, one of excitement."

"Hopefully we will have more investors coming in to build more hotels, bigger hotels. We want more airlines coming here," said Machaka, standing by one of his helicopters.

"I feel very safe, the people are welcoming. Getting the visa was really easy," said Canadian tourist Katelyn Pretzlaff.

French tourist Patrice Lehmann, who was visiting the Victoria Falls for the third time, said: "It's one of the most impressive things I have seen in my life."

"The issue of roadblocks -- it was a disaster, a real problem," the minister admitted.

Authorities have launched an aggressive drive to "reassure the world that Zimbabwe is open for business, Zimbabwe is a safe, peaceful tourist destination," Mupfumira said.

Alongside "Vic Falls", the country's highlights include Lake Kariba, the vast game-filled national parks of Hwange and Mana Pools and the Eastern Highlands mountains. 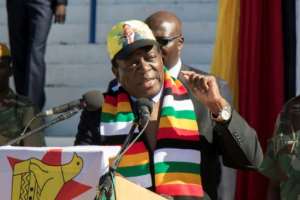 Zimbabwean President Emmerson Mnangagwa is the favourite to win elections on July 30.. By Wilfred Kajese (AFP)

Mnangagwa, a former ally of Mugabe, has vowed to hold a clean election next week as proof of the country's fresh start, but many critics say the same ZANU-PF party chiefs still call the shots.

Mnangagwa is the favourite to win, but any dispute or violence over a close result could spell a return to instability.