Peace Fund To Be Established By Peace Council 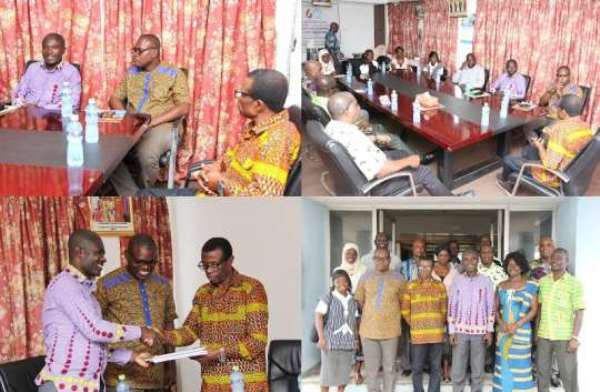 The National Peace Council has hinted that it would set-up a Peace Fund to enable it reach out to many Ghanaians to disseminate its peace programmes.

Mr George Amoh, Acting Executive Secretary for the Council said this when he, together with Mr Emmanuel Anim, the Administrative Manager paid a courtesy call on the Management of the Ghana News Agency (GNA) in Accra on Friday, to dialogue on issues pertaining to the peace of the country and how to promote and sustain the peace in the country.

Mr Amoh said the Fund, which is expected to be supported by both local and international bodies and individuals should be established by November this year, after dialoguing with the UNDP, which is one of the sponsors.

He said the Council's work had been restricted due to inadequate funds and that their visit was to explore ways the two institutions would help to maintain peace in the country.

Giving the background to the Council, Mr Amoh said it was initially called the Peace Advisory Committee until it an Act to that effect was passed by Parliament in 2006, and assented to by the late Professor Atta Mills, the President then.

Made up of 13 members: eight from religious organisations, two each from the Presidency and identifiable Civil Society Organisations and a representative from the National House of Chiefs, the National Peace Council is headed by Professor Emmanuel Kwaku Asante.

He said the Act mandates the members to prevent, manage and resolve conflicts by networking with other stakeholders including the media, National Commission on Civic Education, Commission on Human Rights and Administrative Justice, Security Agencies and the Judicial Service.

The Acting Executive Secretary added that it was important that a strong network was built with these key stakeholders to find out how best to improve the peace Ghana was enjoying.

Mr Amoh noted that the Council was not only mandated to work before, during and after elections, but was also expected to educated communities on conflict resolution, pick signals of conflicts and managed as well as prevent conflicts.

'Though Ghana is an oasis of peace, it cannot absorb itself from violent conflicts,' he stated, and added that the Peace Council was ready to share information and train media personnel on how to report on conflicts so as not to inflame passion.

Asked whether the Council resolved chieftaincy matters, he answered in the affirmative and hinted that it would engage chiefs to bring out their succession plans that would ensure smooth transition so as to avoid preventable conflicts.

He said the GNA, a credible institution, would help carry out the Council's activities in a fair, balanced and objective way that would ensure stability and development of the nation.